The Ringu Tulku ArchiveTHE RECORDED TEACHINGS OF RINGU TULKU RINPOCHE
Login
Join here Get access to the full archive, all courses and help support this endeavour.

Ringu Tulku Rinpoche has been teaching around the world since the early nineties and many of these teachings were recorded and diligently stored away. Many were also kindly sent in to Maria Huendorf in Germany to be archived. The aim of this website is to now present as many of these recordings as possible.

We are currently in the process of uploading these and will release them as they become ready to display. Once we have uploaded all we have, we will launch an online uploading facility so that that members and Dharma Centres can add their own recordings.

In addition to the presentation of past recordings, another key function of the website is to present recordings from Rinpoche’s current teaching tour as it happens. Since 2015, Rinpoche has been making audio recordings of most of his talks and teachings. These recordings are then automatically uploaded to us in the Archive. We are now able to share these recordings on the website almost as soon as they arrive. This means that our members can listen to these recordings as Rinpoche travels around the globe.

We encourage you to become a member of the website and get involved. The website is run by only a few people and we need ‘audience participation’! There are more recordings than any one person could possibly listen to and watch! Therefore we depend on members to help us quality control the recordings and highlight where there are missing parts, information, poor recording quality and other errors. We also encourage our members to write short synopses after they have listened to a recording so that text can be added to the teaching post to help others know what a teaching contains and also aid search-ability. So please feel free to add these to the comment section at the bottom of every teaching post.

Finally, it is Rinpoche’s wish that as time goes on this website will become a key portal where he will be able to both communicate with his students and also deliver and curate longer courses and series of teachings for different levels and stages along the path. We hope that in the near future our Courses section will become alive with an array of rich and diverse courses that members of any level and experience can follow.

We hope that this website becomes an invaluable resource for many people and that the benefits for all beings are vast and far reaching. 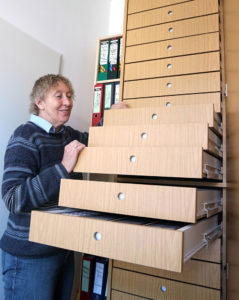 Maria with the original Archive.

The online Ringu Tulku Teachings Archive is a continuation of the archiving process that began when Ringu Tulku Rinpoche started teaching in the west in 1990. Many places made audio recordings of these teachings and then shared them with Maria Huendorf in Hamburg. For the best part of two decades, Maria diligently gathered as many audio recordings as she could. These came in the form of tapes, then CD’s and then other digital formats. In more recent years video recordings were also made and sent to the archive. To help handle these much larger files, Arne Schelling joined Maria as the video archivist. Around this time, Maria was also assisted by Peter Schulz who bravely took on the huge task of digitising all the old audio tape recordings.

As Ringu Tulku Rinpoche began to teach more and more each year, the archive grew and grew. At the same time the technical ability to gather these digitised recordings onto to a website became more and more feasible for a voluntary organisation such as Bodhicharya. Or so we hoped!

In 2014, Paul O’Connor and Minna Stenroos met with Maria and Arne in Berlin and made an initial plan to take the idea of an online archive website forward. Paul built and maintains the main Bodhicharya website. Minna administers the existing online teaching both there and on the YouTube channel. It was felt that the sheer quantity of digital material now in the archive was starting to become unwieldy to navigate. It was also a shame that these teachings were not easily accessible to Rinpoche’s students. And so the project to find a large digital storage and delivery platform began. In early 2017, the archive went online.

Since 2015, Ringu Tulku Rinpoche has also been recording his own teachings via an iPhone app which directly sends the audio recordings to the online archive. That means that we have a guaranteed source of recordings and also means that they become available to the website very quickly.

In August 2021 we registered ‘The Ringu Tulku Archive’ as a company limited by guarantee (CLG) in Ireland.

We would like to thank Ringu Tulku Rinpoche for sharing all these wonderful teachings with us all and for his support, encouragement and patience with this project. We also want to thank him for diligently recording most of his teachings (on his iPhone) since 2015.

We also would like to express our appreciation to Bodhicharya Publications for initially supporting the online archive project in its startup phase.

A big thank you to our developers, Dan Hardy, Johan Björk and Lucas Pelton. Without their expertise in both WordPress and Amazon Web Services we would have surely been lost.

Finally, we would also like to thank all those dedicated Archivists who have diligently grappled with ever-changing technology so that we, the generations of the future, will benefit from the preservation of these teachings. In particular we would like to thank Ger Reinders for his exceptional contribution to the Archive for many, many years. His diligence and dedication have been an inspiration to many.