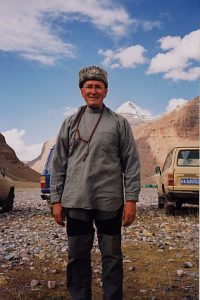 The trek to Mount Kailash Tibet May 2002

Mount Kailash is the holiest mountain in Tibet and probably all Asia.  It is situated in the Ngari region of western Tibet, which is one of the highest, loneliest and most desolate places on the planet.  It rises perpetually snow capped 7,500 metres from the high desert plains which surrounds it.  The shape of the mountain is a near perfect pyramid. The Buddhists believe is was the location where the Tibetan Buddhist saint Milarepa overcame the obstacles created by followers of the ancient Bon religion.  Tibetans also called the mountain Kang Rinpoche which means precious snow mountain. Hindus consider Mount Kailash to be the mythical mount Meru; the world’s spiritual centre.  Mount Kailash is also the source of three of Asia’s most important rivers; the Ganges, the Bramaputra and the Indus.

This trek circumambulates Mount Kailash and crosses the Drolma La pass which is 5,800 metres.  Mount Kailash is not an easy place to get to.  Since it is located 1,250 kilometres west of Lhasa.  For the last 500 kilometres there is no road as such just a rock-strewn track with several rivers to cross and with no bridges.  Our trek was organized by the Samye Ling Tibetan Buddhist monastery in Scotland UK together with an international adventure trekking company.  This trek is a fund-raiser to help them construct a large Stupa at their monastery.  (A Stupa is a symbolic representation of Buddha’s spiritual mind or Dharmakya.)  The physical shape of the stupa is based on the shape of Kailash itself.  Each part of a stupa illustrates and represents different stages of Buddha’s path to enlightenment.

Building a stupa is of great significance in Tibetan Buddhism because it is a very powerful way to purify negative karma and also a way of accumulating great merit.  Stupas can be of almost any size ranging from a few centimetres to the stupa on the Indonesian Island of Java called Borododur which is 200 metres in height.

This trek took place in the Tibetan year of the wind horse [2002].  It is the year which Tibetans believe is the most beneficial year in which to do the Kailash trek.  The reason for this is that to do this pilgrimage in any year will wash away the sins of a lifetime.  But to do this trek in the year of the wind horse will wash away the sins of several lifetimes. The end of our trek around mount Kailash is also planned to coincide with Sawa Daga at Tarboche.  This is the date [the varies because of the lunar calendar but it happens around the 15th May each year] which commemorates the Buddha’s birth and attainment of enlightenment. 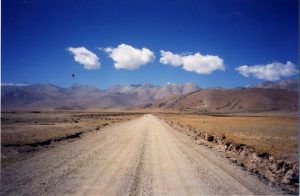 There were 15 of us on the trek excluding guides, drivers, porters and cooks.  In addition to cost of our trek, we each donated at least 1,000 $US towards the construction of the Stupa at Samye Ling Scotland.  Our guide was Bradley Rowe a Fellow of the Royal Geographical Society and a very experienced Tibet expert with an international reputation.  Our group comprised of myself [from Thailand], 1 German, 2 from the US, 2 from Canada, 9 from the UK.  Our ages ranged from 19 to 69 years old.  We all flew from different parts of the world and met up in Kathmandhu Nepal for the departure to Tibet.  The complete trek lasted 6 weeks in all, firstly flying to Lhasa, Tibet to acclimatize and sight-see for a few days.  Then on to the oldest Buddhist monastery in Tibet; the Samye monastery.  From the Samye monastery we went by jeep 1,000 kilometres to the foot of Mount Kailash.  Then we returned overland from Kailash to Kathmandhu by jeep.

END_OF_DOCUMENT_TOKEN_TO_BE_REPLACED 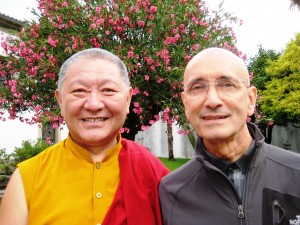 The day after I managed to complete writing the book I rewarded myself with a walk in the forest adjacent to the Samye Ling monastery.  It was here that had my first encounter with a Tibetan Lama who I was later came to know as Ringu Tulku Rinpoche.  END_OF_DOCUMENT_TOKEN_TO_BE_REPLACED