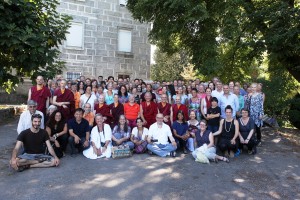 This was my first Summer camp with Ringu Tulku and I chose to attend for two reasons. The first was the wish to learn how to practice the Ngondro properly and the second because Ringu Tulku has proven to be a good teacher on other Dharma topics. The experience was amazing. The clarity of Rinpoche’s teaching from the powers of the Refuge Prayer to the line by line explanation of Guru Yoga has certainly given me a good understanding and I have confidence to continue the practice that my own teacher has asked me to practice. As part of the Retreat the aim was to reach 100,000 of each of the four parts of the Ngondro and I can still hear the sound of rice as it formed many Mandalas and as a group we achieved our blessings. The empowerment that drew the teaching to a close was exactly that – very powerful and ended with us all joining katas while holding candles as brothers and sisters in the Dharma. Add to that the beautiful Portuguese sunshine and the opportunity to practice in the sun, something those of us from Scotland have seen little of this year, a very busy and deeply meaningful retreat.                                                                                         Jenni Campbell

Ten days after the event my response to this year’s summercamp is mainly one of gratitude. Immense gratitude to Rinpoche, to Tsering and to Lama Tsultrim for facilitating a complete short Ngondro practice in one week and also indebtedness to the young, strong and energetic members of the group who managed to carry along with them those of us who are somewhat older and could only do our best. Back in London my wish is to stabilise all that I have received, integrate it into my practice, but first to learn off by heart the 100 syllable mantra that I had not come across before.

Thus, I am to be seen on tubes and buses muttering mantras to myself, hoping other people think I am talking into an invisible mobile phone. This task seems to me to be of the utmost importance and serves to help me to stay in touch with the benefits of the Ngondro practices for all of Rinpoche’s sangha, both those who were at summer camp and everyone else too. Lynda Miller

You couldn’t say there was a best part of the Ngondro because the practice was so well delivered by Rinpoche La and so well paced and every part complemented the whole experience: a valuable practice of the interconnectedness of  Buddhist philosophy. Wandering through and around the grapevines reciting the vajrasattva 100-syllable mantra, the mandala offering, the prostrations and doing Guru Yoga all contributed to this unique experience.  On the last evening, the sangha consolidated the experience by joining katas and lighting candles.

Thank you to Ringu Tulku Rinpoche, Lama Tsultrim and Tsering Paldron for planning and facilitating this event.
Yeshe

My Experience of the Summer Camp

I thought a week of closer proximity to Ringu Tulku might help me understand why he calls himself ‘the lazy lama’. It didn’t. Relaxed, yes, but lazy? Most important to me, he seemed congruent: what he taught, he embodied. His teaching was clear and accessible, presented with both strength and modesty. He revealed glimpses of his profound knowledge and awareness, and more than once I thought how tolerant he must be of the comparative ignorance of the rest of us. It was of enormous help to me that Rinpoche gave Ngondro teachings in a way that they were practical and relevant to our lives and our concerns. His humour helped: I found it healing to laugh with him and everyone else.

The ‘everyone else’ is significant, too. Not surprising, the robed and lay people who cherish Ringu Tulku seem refreshingly balanced. While the wide-ranging conversations I enjoyed with the ones I met were distracting because they evoked in me much reflection, they mostly were heart-warming and inspiring.

For years I have found reasons and excuses to evade Ngondro practice – despite having attended teachings on Ngondro given by HE Tai Situpa at Samye Ling who taught that Ngondro practice is the portal to Mahamudra and despite knowing that positive repetition engenders positive change in the mind.

I registered for the 2015 summer camp with now-or-never resolve and with considerable trepidation. As the result of an ongoing family ordeal, I arrived at the camp too tired to ‘struggle’. “Don’t think about it, just do it,” I told myself. For the first couple of days, I could barely keep awake during the teachings and was glad for the helpful physical component of the practices. Being new among a diverse collection of people gave my sleepy mind abundant material for judgement, analysis, fantasy; and I observed it sluggishly moving in habitual ways, attempting to organise the sensory information I encountered in order to help me feel comfortable.

Gradually, I woke up a little and settled into the practice with genuine appreciation. I was able to notice the care with which the organisers had worked with Rinpoche in arranging for the texts, the translations, the structure. I felt the strong support of the practice of the ‘everyone else’. The mantra music in my head greeted me when I woke each morning and stayed with me throughout the day, and I welcomed stirrings of devotion. I felt an inner release when Ringu Tullku included the name of Akong Rinpoche, whom I had followed since the 1980’s, when he led us in singing the hauntingly lovely ‘Calling the Guru from Afar’ prayer.

I returned home less weary, and with the realisation that while a part of my mind had focused on the practice of Ngondro, something more subtle had taken place of which I had been unaware at the time. For example, I was astonished that the anxiety I had felt about a particular distressing situation somehow had evaporated. This reminded me that a most effective inspiration for more Dharma practice is practice! 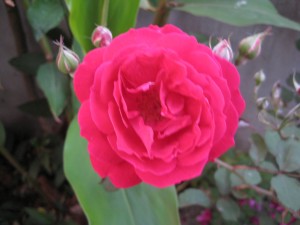