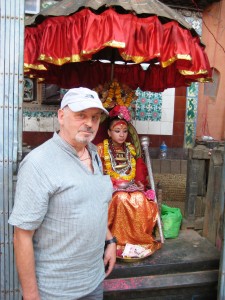 Me with a rather distracted-looking Kumari in Patan

I remember clearly a programme I was watching on TV in the 70s.  The living goddess Kumari was being paraded through the streets of Kathmandu.  Nepal in those days was still emerging from the cultural heritage of the 18th century; and to see a young, pre-pubescent girl deified as a virgin goddess and being worshiped was really, for me, beyond the wildest dreams of Kew…

In the late seventies I had the chance to work as a volunteer in Birganj, a busy, bustling town on the border with India, unbearably hot in the summer months and sub-tropical in the winter.  Outside of the confines of the campus where I taught post-graduate students the art of teaching English, there was very little opportunity to communicate with the locals except in their own language, Nepali.  So I ventured out onto the streets and the bazaar and learned a kind of bastardised version of the language, a mixture really of Hindi, Bhojpuri and Nepali.

END_OF_DOCUMENT_TOKEN_TO_BE_REPLACED 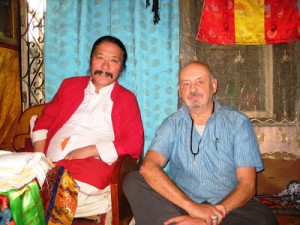 Lama Ngakpa in his room

Keeping an open mind, I decide I would like to have my prospects foretold by a Lama.  The idea of rolling the dice, reading the tarot, seeing angels in tea leaves, stirring the entrails of a dead goat, laying silver on the palm of a chiromancer or allying the state of one’s being to the configuration of the stars and planets used to be a no no with me.

But as there is a limit to our knowledge in a universe of infinite possibilities, and there is a diminishing amount of time in this life during which to discover just that little bit more at least about oneself, I decide to give it a go with Lama Ngakpa in Boudhanath, Kathmandu. Maybe I have become too cynical by shunning an opportunity to try something new, I think:  thus this new willingness to open myself to the experience of having my fortune/misfortune told.  Simply put by my daughter when it comes to her fate and fortune governed by the horoscope in her daily download, It should be fun.

The Lama’s room is next to a Buddhist clinic a few minutes from the main Stupa. END_OF_DOCUMENT_TOKEN_TO_BE_REPLACED 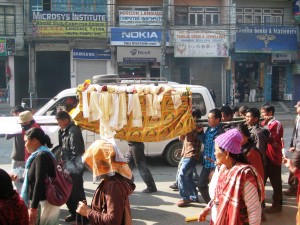 A funeral procession in Boudha, Kathmandu

Death is the theme of today. Mark died ten days ago in a dramatic incident on the then hairline curling road to Nuwakot when he threw out his toddler son from the vehicle he was driving and fell to his own death. This was maybe helpful to all, including his wife and son and himself, since he was a drug addict and apparently beyond help. Death is the greatest blessing in life for all living creatures, whatever their circumstances. It heralds a further life for those who belong to certain religions, such as Buddhism; for others, the atheists, it is the end of all life as it is usually understood; for agnostics it is a question mark, what might arise?

Many people prepare themselves for death more than they fight for life. END_OF_DOCUMENT_TOKEN_TO_BE_REPLACED