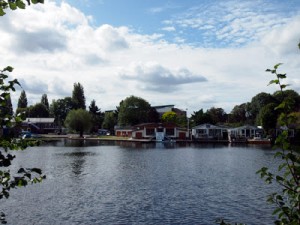 A sliver of land cut from the mainland by a narrow backwater – this was Trowlock Island on the Thames where I lived every weekend from Easter to September and throughout the Summer Holidays when I was young. Although it was only about a third of a mile long it had everything any child could possibly want.

At the ferry end was a clearing where we played ball games – usually French Cricket – and at the far end a wooded area where wildfowl nested and there were blackberries and flowers to pick as well as places to hide and trees to climb. Here we became intrepid explorers fighting through the jungle or Indians fishing from the banks and swimming in the river or Tarzan and Jane swinging from ropes we tied to the trees;  but most often we were Pirates because we all had boats – dinghies or Canadian canoes.

There were hardly any adults around during the day, and the only children were Islanders – it was a private Island so the ferryman fended off any potential invaders – and we enjoyed almost total freedom, only returning to base at mealtimes or to exchange wet bathing things for dry bathing things.

all year round and there was no mains electricity or drainage; the only running water was from a single standpipe for all the residents. There was gas for lighting – although we usually went to bed when it got dark – and for cooking.

Meals were simple – scrambled eggs or sardines on toast – except when the adults came with ingredients for Sunday lunch and then we were dragooned into shelling peas or chopping mint for mint sauce. In summer the El Dorado man rowed round in his white boat selling ice-cream.

When I was older I had friends from School and University to stay and then we ventured further afield – rowing upstream to Hampton Court and downstream to Richmond and Kew; my last Island holiday was my honeymoon, over sixty years ago, but the memories of a magical place to grow up in remain.

What of the Island now? There are still 29 Bungalows most of which have been rebuilt with all mains facilities and are occupied all year round; a self-operated chain ferry has replaced the ferryman and the small craft are mostly motor launches. It is advertised as one of the most desirable rural areas within a short distance of the City. I would not argue with that. 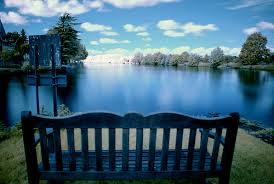 Ann currently runs a Creative Writing Group for University of the Third Age in Edinburgh.