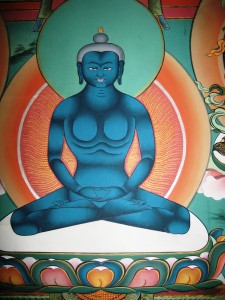 In the years following Buddha Shakyamuni’s demise Buddhism was propagated in all sorts of ways; mendicant monks travelling around the country spreading the word to name but one.  Following the famous conversion by Emperor Ashoka, Buddhism became enmeshed into the political system of his ever expanding Empire and was soon adopted, perhaps not always willingly, by his subjects.  Much proselytizing went on.  However, fast forward to more contemporary times and we find most Buddhist traditions don’t set out to make converts.  Indeed, the Dalai Lama has been heard to suggest that “everyone should pursue the religion of their homeland to find happiness & fulfilment …….” Many teachers have to be ‘requested’, some up to three times, to give teachings.  In the West, one has to find Buddhism – it doesn’t find you.  So how then does an early middle-aged Englishman, professing no more than a rather woolly amalgam of atheism, humanism and agnosticism, and decidedly not searching for anything spiritual, end up involved in Buddhism?

My answer, nearly a quarter of a century ago, was “by chance” or “I stumbled across it”.  But that of course was before I had much idea of the weird and wonderful ways of karma.

In the late eighties and early nineties I was employed by a chamber of commerce to run government funded contracts promoting business and education links.  This involved getting the local business community and the secondary and tertiary education establishments to work closely together so that school and university leavers were well suited to jobs within local industry and commerce.  Although often stimulating, the task involved much small ‘p’ politicking, especially where the local authority was concerned.  And trying to make progress with often conflicting agendas, both hidden and overt, made for a stressful job.

After a particularly tiresome day, I was thumbing through the local paper and spied an ad for a talk at the local library about the stress-relieving and health-giving benefits of Transcendental Meditation.  (TM)  It was a wet and windy evening and I was surprised to see the upstairs library room packed with soggy people eagerly awaiting the presentation.  A rather shy young man introduced himself then showed a short but well produced and convincing video promoting the meditation technique, including many affirmations from users and medical practitioners as to its efficacy.  He then requested questions.  I asked one of the first, the answer to which must have lost him a large number of potential clients; how much does it cost?   He wasn’t a salesman and, to his credit, he didn’t beat about the bush but came straight out with £170, if I remember correctly.  At which point, over a third of the audience got up and left.

Given my stressful work situation, I decided to pay up and do the course which, if my memory is accurate, consisted of a group session of about a dozen, learning the nuts and bolts of the technique, followed by an individual session with the teacher where he took each one of us through our first taste of actually ‘doing it’, then a number of optional follow-up group meditation sessions.  To this day, I can still remember that individual session as being the most intense meditative experience I’ve ever had.  It was somewhat disturbing at the time.  With hindsight, not surprising really, as it was the first time I’d ever attempted anything like that.  I was converted.  The technique worked but, to my mind, it was purely secular, having no spiritual connotation.

So, life continued.  I was always first in the office in the mornings and would grab twenty minutes to meditate in the peace and quiet before my colleagues arrived.  Again in the evening I’d put in a session after the cleaners had left and before going home.  Work was just as manic, but didn’t seem half as irksome as before; and people sometimes commented as to how cheerful I was.  My one hundred and twenty quid was money well spent.  I continued practicing twice a day for about eight or nine months then gradually lapsed until ceasing meditation completely.  I didn’t seem to need it any more.

About a year later, I received a phone call from an ex colleague who remembered my meditation days, and saying that she’d seen meditation classes advertised at the local interfaith centre, wanted to attend, but not on her own and would I come with her.  I agreed.    As we sat waiting for the session to commence, listening to about fifteen others, we realised that this was a regular weekly event; part of a series of such events it seemed.   The young woman teacher came in and sat at the front and introduced the subject of ‘emptiness’.  “Everything exists in dependence on other things” and “nothing exists inherently from its own side” she said, and went on to explain quite well what she meant.  This is when it dawned on me that the session was about Buddhism.  Talk about being tipped in at the deep end!  She finished the event by leading a meditation session; not at all like the meditation I’d been taught at the TM class.

I pondered on the subject matter of the evening on the way home.  I’d never before thought about the nature of reality.  Like most people I suspect, I had a pretty simple but fixed idea about what  was real and unreal.  Her ideas seemed simple but in one sense, quite profound.   I was interested enough to attend again the following week.  My friend and ex colleague wasn’t so impressed and went off to do acupuncture.  With hindsight, I can see that these events all came together at just the right time.  A few years earlier and I’d have dismissed the whole thing out of hand.  “That’s all away with the fairies” I’d have thought.  As a late developer so to speak, I’d reached a level of maturity and had enough of life’s experiences to approach such ideas with an open mind.  I continued to attend the weekly sessions and was introduced to the basics of karma, past and future lives, boddhichita , the Four Noble Truths and all the usual subjects that the readers will be familiar with.  Within a few weeks, our teacher became ordained as a nun; we all contributed to her first set of robes. She’s now a senior teacher within her tradition.

I served my Buddhist ‘apprenticeship’ with the NKT, in and around centres in West Yorkshire, with twice yearly visits to the Manjushri Centre at Connishead Priory near Ulverston in the Southern Lakes.  I took refuge vows quite early on, Boddhisatva vows later and was granted a series of empowerments as time went by.  It was customary then within the NKT to grant empowerments too frequently and to those, including me, with neither the knowledge nor the background appropriate for the practice.  So, although I see my initial vows as genuine, the rest I’ve now sort of ‘written off’ to experience.

Although I know that the NKT has some talented teachers and many sincere practitioners, most readers will be aware of the organisation’s situation regarding certain Dharma Protector practices and its relationship with HH The Dalai Lama.  For these reasons, and because of conversations I had with people in both Dharamsala and Bodhgaya, I decided to leave the NKT some years ago.

In 2007/8 I visited Samye Ling for the Christmas/New Year course and took refuge vows again with Lama Yeshe the following Easter.  I’ve attended each Christmas/New Year course ever since.  In April last year (2013) I relocated to the Centre, or to be precise, to Garwald, a mile and a half up the road from it.  I’ve been given permission from Lama Yeshe, Samye Ling’s Abbot, to convert a derelict barn into a dwelling, and here is where I’m planning to end my days.  Having gone through the rather arduous Scottish planning and building regulations process, I’ve been busy building walls, constructing a roof and digging trenches for installing utilities, all the while living in my motorhome on site.

Admittedly, I don’t visit the Temple very often but, simply being part of the Samye Ling Community and living in such a beautiful area, for me are a great help to Buddhist practice.   Dealing with the abovementioned bureaucracy and all the attendant delays and supply problems of a self-build project are certainly a practice in patience.  And a personal adaptation of the practice of Tong len helps with the rigors and sheer physicality of building work.

I do finally feel that I’m at home.