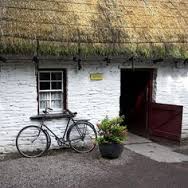 Our grandparents’ house was one story with the thatched roof common to most houses in our particular area at that time. It consisted of a kitchen/cum living room, two bedrooms and what was known as “the good room”, this room was only used on very special occasions such as gatherings at weddings or funerals. I would imagine that when my father and three brothers were growing up it would have been a bedroom and only in later years when they had flown the nest converted into what could be termed a parlour although I never heard that term being used in our neck of the woods. I feel that the room did not see a great deal of use it being more of a status symbol than anything else.

The main feature of the room was its fireplace. Mother always referred to this as “the Yankee fireplace”, not because of any particular American quality in its make up but, rather, because it had been a gift from my Great Aunt Mary on one of her visits from her adopted country across the sea. Aunt Mary being what was then described as a spinster lady was wont to lavish her largesse on various family members, not the least being my grandfather, her favourite brother.

The fireplace was of a black cast iron construction with side panels of colourful tiles, the whole being surrounded by a wooden frame supporting a broad mantelpiece the latter bearing two large China dogs placed one at each end while in between were placed a few family photographs. The same type of fireplace would now be described as Art Deco and would be most likely fuelled not by coal or peat but, rather, by gas or electricity and not connected to any kind of chimney.

The walls displayed three or four embroidered samplers conveying slogans of an improving nature. The only one I remember is that which exhorted its readers to “neither a borrower or a lender be.”

Along one wall was a horsehair stuffed chaise longue, covered in what I presume was a leatherette material and quite incapable of giving what could be described as a comfortable seating experience. A glass case containing various knickknacks completed the complement of furniture along this wall. The only item in this case that comes to mind now was a colourful mug adorned with the royal coat of arms and bearing some words to the effect that it celebrated ” Sixty glorious years” of Queen Victoria’s reign. Probably a forerunner of the Coronation mugs which appeared at the commencement of subsequent reigns.

A high backed chair composed of the same material as the chaise and to my mind just as uncomfortable, graced the opposite wall along with a bookcase containing a collection of for the most part high minded books which I and, I suspect, no one else in the household ever peered inside. It was in this bookcase that I made my acquaintance with Zane Gray via a novel called Riders of the Purple Sage. There was another book which I deemed to have possibilities but which I never got around to having more than a cursory glance inside namely, Mister Midshipman Easy by a Captain Marryat, whom I learned much later was a retired naval officer who had served during the early 19th century and had written some quite well known books. He must have been writing at the same as Charles Dickens. I have always regretted passing up the opportunity to make his acquaintance but maybe not as his writing may have been full of the high flown fustian of the day but, again, Dickens is readable so why not Marryat. We’ll leave that discussion for another time.

The complement of furniture was completed by a table and, if memory serves, two balloon backed chairs. One of which had a cushion strategically placed over a rent in the leatherette seat where the horse hair stuffing was making its present felt. On the rare occasions when the room was in use additional chairs would, if required, be moved in from the kitchen. If memory serves the table supported a brass bound pot containing a species of aspidistra or similar plant. I do recall that it had large evergreen leaves.

Of the few occasions when I was present in the room at a family gathering only one of these comes to mind and this to sometime in 1946. I was a mere schoolboy at the time and we were gathered after the burial of my grandfather. Probably the strongest reason for this remembrance was the presence of my Uncle James. It was the first and last time I saw him. He was the youngest of my grandparent’s four sons and in common with the other three was part of the Protestant exodus from that part of Ireland when 26 of the 32 counties became independent from the rest of the U.K. in 1921. One had gone to the United States, my father and the oldest brother to the new state of N. Ireland and James to England where he joined the Royal Army Medical Corps. After leaving the Army he became a prison officer and served in the medical departments of various prisons in England. At the time of our meeting he had a certain celebrity status as he had met the infamous Lord Haw Haw, proper name William Joyce, who had been a guest in his prison, Wandsworth, prior to his execution for treason in January of 1946, just a few months before our meeting. Needless to say he was the centre of attraction for the course of the afternoon.

Sadly, the room is no more. After my grandmother’s death in 1976 the house and land passed from our family and the new owner allowed the house to crumble away while he built a fine new bungalow in an adjacent field. A few years ago on a visit to the area he was kind enough to give me a tour of what was left of the house, really only a couple of walls and nothing of the room. While I contemplated the remains of the representation of another time and place the words of the old song came to mind, “Why stand I here like a ghost or a shadow? ‘Tis time I was moving. ‘Tis time I’d passed on.”….