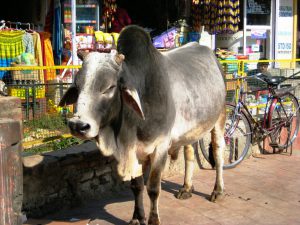 Six in the morning and the heat was already rising in waves from the earth. Runnels of sweat ran down the faces of the two passengers swaying to and fro in the rickshaw.  Crows cawed ominously and flew down from the trees, scavenging the streets for carrion. A cow ruminated at the side of the road and looked at them dolefully with its indifferent, watery eyes.  Although together in the one place – man  beast and bird – they retained their separateness, each aware of the other without concern.

Being early for the temple, Tom, a tall American, bronzed with the sun, suggested to Kumar, “Let’s have a look at the market.”  This was Kumar’s chance to show Tom around the district as both felt they had  languished too long in the village and welcomed the chance to visit the nearby Keshav Dev temple in Mathura, the legendary birthplace of Krishna.

For the past six months Tom, a Peace Corp Volunteer, had been spending his time introducing planting techniques in the village  but had discovered very soon after his arrival that the old farmers knew more about the land and the requirements for a high rice yield than he did.  With lassitude, Tom felt relieved to abandon his post at Bhoodari village and travel with Kumar to the city.

In the market place, rows of stalls were covered in light tarpaulins, plastic sheets, and old sun-faded newspapers.  Some stall owners sat around laconically smoking small bidis and drinking milky sweet chai from glass tumblers.  Only one stall at the edge of the lane appeared to be open, its owner fussing over the array of bric-a-brac with a large, black, feather duster.

Incongruously, he wore an over-sized suit, a shirt and tie that looked as if it had been bartered  in exchange for goods from his stall at one time.  His face was sharp and weasel-like, small eyes glinting from under heavy, black eyebrows.  An oily layer of hair swept over his brow; and sunken cheeks spoke of poverty he had endured during his twenty-odd years of life.

As they approached, the stallholder brightened and became more animated in his dusting.

Kumar enquired, “What time does the temple open?”

“Oh, be opening soon, my friend,” the man responded, looking at Tom and ignoring Kumar.  “Would you see some fine jewelry, soapstone sculpture?”

Tom, feeling a little uncomfortable, declared, “We’re just having a look till the temple’s open.”  Turning to Kumar and dismissing the stallholder, Tom asked, “What do you think?  Was Krishna really born here, or is it just myth?”

The stall holder interrupted. “No! No!  here he was born, certainly.  He very good god.  He loving by all milkmaids in Mathura then steal their cloths when bathing.  Now look!” he insisted, “Silver frame.   Good quality?  Very good quality. No?  Very nice.  Have look and see!  Just looking!  Go on!”  His eyes pleaded, “You my first customer.  Please to be buying.  I have little children.  I lucky you buy.  Very cheap price…for you…today my first customer.”

Tom, by this time, was beginning to back off while Kumar stood nonchalant and amused with his hands in his pockets.  “Really, we don’t want anything.  Just having a look,” Tom explained.  But a tone of guilt was beginning to sound in his voice and the stallholder, skilful in detecting any subtle evidence of reticence in a prospective customer’s voice, lunged for the prey.

“You must buy.  Special price.  Just for you.  Look!  Look!  Photo of Krishna.  Here his peacock feather…very beautiful…you buy for present…take home.”

The sales pitch was becoming more and more frenetic as he noticed Tom beginning to sidle away.  Bangles, bells, photos. garlands and incense were thrust before Tom and in desperation he turned to Kumar.  “Guess this is a place of peace.  How do I tell him to go in peace?”

“You know, go in peace.  I just want to get to the temple and get out of here.”   Tom had the uncomfortable feeling of being trapped and it was becoming more and more tangible, evident in the frantic look on the stallholder’s face.

Tom practised this a few times under his breath, turned to the stallholder and said a little shakily, “Pisab gorkyo.”

A flurry of invective poured from the stallholder and, although Tom didn’t know the language, he could guess that there was something in the torrent of words about is personal life.  “What did he say?” asked Tom.

Kumar replied, “Some local language.  I guess something about your sister and your mother.

“Why’s he getting so angry?  C’mon, let’s go.”  As the flood of words continued, Tom was pulling on Kumar’s arm to get away.

Kumar, laughing, let himself be led away and said to Tom, “Why did you tell him to go and piss?”

As they made their way across the road towards the temple, their laughter was joined by the sound of several crows, cawing in unison from the wires above the stall.  The stallholder looked angrily at them, picked up a stone and threw it, but the crows fluttered their wings, rose a few feet in the air and landed once again on the wire, cawing and screeching more loudly that ever.  The cows slowly raised and turned their heads to watch the pair cross the road and disappear through the gate and into the temple across the way. 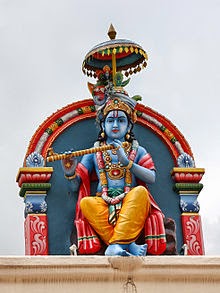