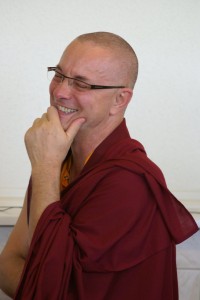 When did you get the wake-up call?

At the end of the 70s when I was working for Air France as a steward I became aware I had to find the answers to the metaphysical questions I had been asking myself since childhood, it was becoming urgent, it was impossible for me to spend all my life without taking care of the spiritual dimension that I felt was essential to my life. I had felt this from the age of 7 and told my parents that I wanted to be a Christian monk. Nothing was pleasing me more than visiting monasteries or any other Christian holy place. Around the age of 25, when my life was seemingly balanced on an emotional and professional level, a part of me was in a state of permanent dissatisfaction, a kind of non-completeness, I then started my quest, first in Catholicism and then in oriental traditions as I became disappointed by the answers I found in Christianity.

Was there a particular event that made you “ leave it all behind” or a long series of global and/or personal issues?

When reading the life of Buddha, I felt very deeply that in there was an answer to my quest. That path seemed logical to me and I started devouring a huge number of books on the Dharma. The more I read the more deeply in tune I felt with this doctrine.

What difficulties did you encounter?

I did not encounter any apart from, at the very beginning, some uneasiness towards Christ and his teachings. My choice was somewhat a betrayal but the dilemma quickly disappeared and I took refuge as early as 1983.

Did you meet one, or more special Buddhist or Buddhists who inspired you and helped you along the path?

After taking refuge, I met Kalu Rinpoche in Paris. I did not feel anything special on my first encounter but on my second meeting I felt the arising of an intense devotion, an uncontrollable, powerful devotion that resulted in endless sobbing. It was uncharacteristic behaviour, far from my rather Cartesian and reasonable usual ways. I had difficulty explaining it, feeling a limitless opening of my heart mixed with a great confidence.

When and how did your life on the Dharma path start?

From that time, as soon as I had a few days’ leave, I would take a plane to India and spend several days a month in Sonada, in Kalu Rinpoche’s monastery, near Darjeeling. Rinpoche introduced me to the preliminary practices and on my request gave me the Chenrezig initiation in his sitting-room. The idea of becoming a monk emerged again in my mind and I asked for part-time employment in my professional capacity in order to live in India as often as possible. I took the Bramacharya vows in 1985 and with Kalu Rinpoche’s agreement, I started getting ready for the traditional three year retreat by studying Tibetan, the different rituals and by freeing myself from any affective attachment. In 1987 I took the Guestsul vows with Kalu Rinpoche. These are the basic monastic vows and in 1988 I went into retreat in Burgundy (France) until 1992. At the end of this retreat, I took the Guelong vows with Bokar Rinpoche. These are the vows for fully ordained monks.

After my retreat ended, I had 6 months of solitary retreat and understood that living as a hermit was not for me. After being a Lama for a few months in a centre in Normandy, Bokar Rinpoche allowed me to teach within my own association. In 1997, I moved to Strasbourg to create a centre upon the request of a small number of practitioners there. I met Ringu Rinpoche in 2002 when I invited him to come to Strasbourg. When Bokar Rinpoche passed away in 2004, Ringu Rinpoche agreed to my request to become the spiritual authority of the Strasbourg centre and of other groups of practitioners in several towns in France. Our centre then took the name “Bodhicharya-France”.
In 2008 we bought a property near the village of Lusse, in the Vosges mountains while maintaining a meditation group in Strasbourg and I settled in this new monastic centre.

You have a gift for languages. Was learning Tibetan challenging and how long did it take you to do so? Why did you learn Esperanto? Do you use Esperanto a lot?

Learning Tibetan was not difficult but I speak it really badly because I was too lazy to learn it in greater depth!
I learnt Esperanto because I found the idea of creating an international language interesting not to say brave. It is a pity that it is often considered with contempt and not taught. Esperanto is easy to learn and is as rich a language as any other. Learning it as a second language would create equality for all humans. We did not create the European currency with the ‘internationalisation’ of a national currency!

I studied opera for several years. My grandmother on my mother’s side was an opera singer and she transmitted to me the taste for this particular art.

Why did you choose the Lusse area?

We were looking for an isolated place, in the country-side but not too far from big towns and cities in the East of France. The Vosges met the criteria. We were really made to feel welcome by the inhabitants of Lusse and the region.

Is the Buddhist Sangha around Lusse growing? Is it local or from a fairly wide area?

Overall the Sangha has grown since we started in Lusse. About fifteen persons from the surrounding villages come to the centre for practice weekends and the monthly teachings.
The tcheulings or meditation groups affiliated to Bodhicharya-France cover the greater part of eastern France (Alsace, Bourgogne, Champagne-Ardenne, Franche-Comté and Lorraine regions) as well as the South of Paris region.

Any on-going projects to develop the centre at Lusse?

The centre is currently being renovated. The dormitories are all turned into en-suite single bedrooms or en-suite bedrooms for two. We decided to take on this renovation to better fulfill the objectives of the centre, that is, to allow monks and nuns to live in accordance with their commitments and also to allow secular visitors to spend a few days in retreat and meditation.
This renovation will be spread over several years depending on available finance.

How many nuns and monks are living in, if any?

We are three monks, one nun and two secular persons in full-time residence at the centre.

In your opinion, what aspects of their behaviour should individuals change to make the world a better place?

To work to transform their minds while becoming aware of the misguided working of their minds and following the Buddha’s instructions. People are expecting too much from outside themselves, from society, from others, from the state, etc.

You have the environment at heart. What measures are you able to take at Lusse?

We have started a small plot for organically grown vegetables, we are all vegetarians and we are also vigilant in avoiding any waste, in particular energy waste. We also protect the animals around us especially in the winter months.

Do you remember a funny event that happened to you as a Buddhist?

I would have to think about it!

Are you a busy lama or a lazy lama?

I am rather an active lama, I teach a lot, in eight towns every month, once a month in Berlin from next January and also in other European towns. I also contribute to “la Fête du Bouddha” that takes place every year in Strasbourg which is open to the public at large and which regroups all the various types of Buddhist communities in Alsace, providing inter-faith exchanges.
I initiated the building of a school in India called “Une école à Bodh Gaya” in a small village close to Bodh Gaya. There are three hundred pupils, all born into the misery-ridden untouchables. The education is free as is lunch and medical care. It is essentially financed through donations and a sponsorship system. To the school, we have added the building of a dispensary where care and medicines are free for the local people. A male and a female nurse are working full time in this medical centre.
And finally we have opened a vocational training centre for the women of the village. Up to now, several of them have completed seamstress training validated by a state diploma which would allow them to be salaried if need be. So I go to India at least once a year to check it is being run well.
Visit the link: http://ecolebodhgaya.pagespro-orange.fr

Any particular message you would like to send our readers?

Anyone is able to give a spiritual dimension to their life, with love, compassion and respect for all that live.

For more information about Bodhicharya France please go to http://www.bodhicharya-france.fr/ 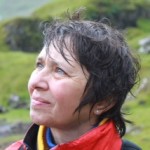 Translator English-French and vice-versa for Bodhicharya.

I moved from South-West France to England when the  Miners’strike was coming to an end.  I taught in three private schools in North-west Cumbria then joined a local comprehensive and left my babes (kids) some fifteen years later when my husband retired.
I met RTR in Samye-Ling ,Scotland and took refuge circa 1992 while he was there.