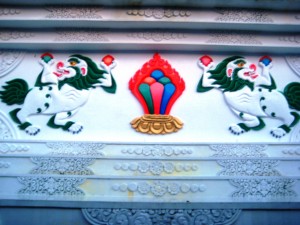 DETAIL ON THE BASE OF STUPA AT SAMYE LING

When one encounters anyone born in the west who is a Buddhist, the likelihood is that they were not born into the faith, but have come to it in later life as a result of their individual, spiritual journey rather than because of their upbringing. And so it was with me.

Having been born in Manchester to parents of Jewish and Catholic origins I was brought up in a Jewish household and even attended a Jewish school where Hebrew was part of the curriculum. As with many young people my teenage years were a time of rebellion, searching for and asserting my identity. In a state of confusion and uncertainty Agnosticism seemed to be the only honest position to take.

In adulthood my work as a writer and designer led to extensive travel and exposure to many different cultures and belief systems. The eight years I spent living in Bali Indonesia were particularly influential in awakening my dormant spirituality. Balinese religion is an eclectic mix of Hinduism, Buddhism and Animism. What attracted me was the way in which the religion pervaded every aspect of Balinese life. It isn’t something practiced predominantly on the Sabbath but rather the essence of everyday activity manifesting in everything from daily flower offerings distributed to a multitude of shrines in and around the home, to joyfully elaborate music and dance accompanying endless ceremonies and rites of passage.

During this period of my life I was also a voracious reader of spiritual books of many traditions. It was a time of ‘spiritual shopping’. Gradually the Buddhist books began to outnumber the others with Tibetan Buddhism becoming particularly prevalent. The story of Tibet’s great Saint, the Yogi Milarepa, was especially inspiring as it demonstrated how it was possible to overcome even the most adverse circumstances and still become a Buddha in one lifetime. More contemporary inspiration came from His Holiness the Dalai Lama whose books I devoured avidly.

On returning to the west and hearing that His Holiness the Dalai Lama was giving a public talk at Kagyu Samye Ling, a Tibetan Buddhist Monastery in Scotland, I lost no time in driving to this Tibetan outpost in the unlikely environs of Eskdalemuir near Lockerbie. Although it was May there had been an unseasonable snowfall as if to welcome His Holiness and make him feel at home. Thousands of people had converged on the Monastery, far too many to be seated in the considerable temple, so a huge marquis had been erected in the grounds.

Taking my seat amongst a motley throng of people of all ages and nationalities, drawn together by the spiritual magnetism of this Tibetan holy man of peace, I happily waited whilst people watching, lulled by the rise and fall of multi-lingual conversations that rippled around me. Suddenly there was silence. His Holiness stepped onto the stage beaming at everyone with eyes of utter love and compassion. It was a life changing occasion accompanied by an unmistakable sense of having at last come home. Little did I know that within a few months I would literally make my home at Samye Ling, much less that I would be ordained as a Buddhist nun.

This article was first published in The New Statesman

Ani Rinchen Khandro is a life ordained nun in the Kagyu lineage of Tibetan Buddhism. She is based at Kagyu Samye Ling Monastery and Tibetan Centre in Scotland where she has lived for the past fourteen years, apart from the three and a half years she spent in closed retreat on Holy Island. She recently wrote a book in honour of the Centre’s fortieth anniversary, entitled Kagyu Samye Ling – The Story, available for purchase online.