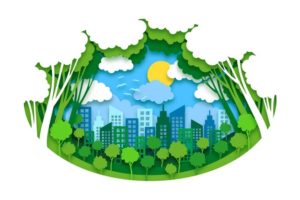 “Hear now this, O foolish people and without understanding, that have eyes and see not, that have ears and hear not”.  Jeremiah 5:21

The year is 2019 and everyone is talking about the environment, especially in the wake of the school strike for climate change, started by the remarkable Scandinavian teenager Greta Thunberg. It seems to be a new conversation but, in fact, scientists have been speaking, writing and almost screaming about this subject for many years. Some of us have been listening, but, on the whole the powers that be have not really got the message that “business as usual” cannot be sustained, and major changes will be needed if humanity is to continue to exist on this planet.

In the 1950’s and 1960’s, the pioneering biologist Rachel Carson presented detailed observations of ecosystems which were being disrupted, on an unprecedented scale, by the use of chemicals, and particularly by the use of pesticides and herbicides. In her classic book Silent Spring, which was published in 1962, she describes, chapter by chapter, chilling scenarios such as the near total depletion of salmon in rivers which had received run off from areas sprayed with insecticides. She catalogued many other instances of harm done to plant, animal and human life due to indiscriminate use of chemicals.  The powers that be, who were interested in promoting the farming and forestry industries, had no real understanding or interest in “ecology”, and so were not inclined to listen. However, Rachel Carson did catch the attention of President John Kennedy, and eventually she testified in congressional hearings. Her work has been cited as being largely responsible for the establishment of the Environmental Protection Agency in 1970. Had she not died from cancer in 1964, at the age of 57, we would certainly have heard a lot more from her. But, also, since Rachel Carson’s time, pesticides with greater toxicity have continued to be introduced and have become more and more pervasive throughout the food chain. Genetically modified crops are designed specifically to tolerate high concentrations of toxins applied to the fields, even as we learn that pesticides are implicated in cancer and autism. Since 2016, the US government has actively dismantled many environmental protections.  So, are we listening?

Another modern classic, Diet for a Small Planet, was first published in 1971. The author, Frances Moore Lappe, concerned herself with the problem of world hunger. In this book, she shows how meat centered farming (especially that which involves grain fed animals) uses vastly more water, fuel and land, and that widespread shifting to a plant centered diet would go a long way to alleviating world hunger, while conserving those same limited resources, namely, water, fuel and land. Diet for a Small Planet presents a hypothetical “all plant diet” together with nutritional analyses to prove that such a diet contains ample protein and other key nutrients.  To show that such a way of eating is feasible, the analysis is followed by practical cooking instructions for  ingredients unfamiliar to the American public, such as whole grains and beans. Frances Moore Lappe has continued to write, teach and organize internationally, and has received 19 honorary doctorates to date. And yet, the lungs of the world, the Amazon rain forests, continue to be torched in order to grow food for beef cattle. The demand for beef has never been higher. So, is anyone listening?

The American space program gave us the chance to see our very own planet, photographed on the way to the moon, in 1972. The “blue marble” photograph showed a breathtakingly beautiful blue sphere with wisps of white cloud against the backdrop of space. The image showed us our only home, where we all must live.  Nearly 20 years later, the Voyager space probe sent back an image of the earth as a barely visible Pale Blue Dot. The astronomer and philosopher Carl Sagan shared his perspective on this image.  “the Earth is a very small stage in a vast cosmic arena. Think of the rivers of blood spilled by all those generals and emperors so that, in glory and triumph, they could  become the momentary masters of a fraction of a dot…. There is perhaps no better demonstration of the folly of human conceits than this distant image of our tiny world. To me it underscores our responsibility to deal more kindly with one another, and to preserve and cherish the pale blue dot, the only home we have ever known”.

These words have been widely applauded and quoted. Yet nations continue to build nuclear arsenals, and recent reports tell us that the amount of plastic waste in our oceans has come to outweigh all the fish in the seas. So, is anyone really listening?

In 2019, a scientific paper of great scope and significance was published in The Lancet, a top medical journal. This paper, Food in the Anthropocene, was authored by 37 experts from 16 different countries, and brought together data from the fields of human health, agriculture and environmental science. The aim of this undertaking was to develop evidence based global scientific targets for healthy human diets from sustainable food production systems. It speaks of feeding a projected population of 10 billion humans on planet Earth in the year 2050, with a diet whose elements are known to enhance health and reduce the burden of chronic disease. At the same time, the emphasis in farming would need to shift to products and farming methods that will ensure achievement of the standards set out in the UN Sustainable Development Goals, and the Paris Agreement of 2016, so that planet Earth will remain inhabitable for humans.

This 40 page paper is full of meticulous detail, looking at farming outputs with respect to greenhouse gas production, land use and degradation, pollution of waterways from fertilizers, pesticides and animal waste, biodiversity loss, and so on. It essentially connects many of the dots from pre-existing research, so that the big picture can be seen. The paper comes out with a “reference diet” that can be produced through farming methods such as conservation agriculture, which limit damage to the environment and can even regenerate soils. This reference diet can be adapted to different regions with different climates and cultures.  [Reference 1]

This landmark paper notes that healthy diets consist of a variety of plant based foods, while minimizing animal based foods, refined grains and processed foods. To achieve the targets set out in the paper would require a 50% reduction in unhealthy foods.

Food production is the largest cause of global environmental change, and portion for portion, production of animal based foods and particularly beef, use more land and energy and produce more greenhouse gases and pollution than any of the plant based foods, including beans, nuts, seeds and grains as  major sources of plant protein.  [Reference 2]

These concepts have been presented before, notably by Rachel Carson and Frances Moore Lappe whose books sold millions of copies. But the Lancet paper really brings it all together, connecting the different disciplines and giving a very specific template for individuals and also for policy makers and governments so that harmful practices can be reduced and beneficial ones adopted. It has a chance to work, if we listen and if world leaders listen.

I would like to emphasize that Food in the Anthropocene is not someone’s blog or a touchy-feely opinion. In fact it could never have been written by a single person since no individual could possibly master so many different scientific fields, and it relies on whole bodies of pre-existing research.

It is an example of what human beings with a shared purpose can achieve, uniquely, by working together. The purpose, a noble one, is to make a better world for the future, a future which many of the authors may not live to see. Neither will they know the beings, humans and others, who will benefit or who will be spared unnecessary suffering, if the recommendations in this paper are followed. As far as we know, only humans have the capacity to envision working for the benefit of the future, and the ability to communicate and cooperate in order to make it happen.

We can rest assured, however,that if the world continues with business as usual, and climate change accelerates, there will be untold suffering from extreme weather events, more and more frequent droughts, floods, heat waves, crop failures, whole areas of the world becoming too hot to inhabit, displacement of populations, conflict over scarce resources, tropical diseases appearing in formerly temperate climates, and much much more.

2019 it was, and at the time it seemed reasonable to talk about 2050, to plan changes to do some day, some time, or whenever. There was still plenty of time to breathe, to sleep walk and to go about business as usual, at least in the affluent West.

But now it is 2020, and we are truly in unexplored territory. Corona virus has knocked the whole world sideways, and we are just at the beginning.

If authorities had been listening to the concerns of epidemiologists, they would have understood the need to prepare for a pandemic. There have been several viral epidemics in recent years, all originating in animal viruses which have jumped from species to species, mutating along the way and gaining the capacity to infect humans. The conditions that support this process include having different species crowded together as in the “wet markets” of China, but also the crowded and unsanitary condition of factory farming for meat. Physician, public health expert and author Dr Michael Greger described this danger in his 2006 book, Bird Flu, a Virus of  Our Own Hatching.  The so called “Spanish flu” of 1918 was a bird flu, and the epidemiologists and public health doctors have been anticipating a pandemic for some time, especially in the wake of SARS, MERS, H1N1 flu, and Ebola, which all originated in animal populations.

Corona virus is the first pandemic of the twenty first century but is not likely to be the last.

If the powers that be needed any more reason to promote a shift from a food culture based on factory farmed animals, perhaps COVID 19 will convince them.

For those of us who claim to care, who claim to act from compassion, then also, maybe 2020 is the time to see clearly, and let go of the meat on our plates, or reduce it drastically.  If not for our own health, if not for the animals, if not for the environment then as a way to stop sponsoring the food system that gives rise to pandemics.

As Don McLean sang to us years ago, “They would not listen, they did not know how. Perhaps they’ll listen now”.

3. Bird Flu, a Virus of Our Own Hatching, on dr.greger.org for print edition. Free digital editions may be found on the internet.

Disclosures: Dr Miriam Maisel is a GP with a diploma in Lifestyle Medicine, and promotes a whole food plant based diet for health improvement and prevention and reversal of chronic disease.

This article has recently been published in Medium Forum.

2 thoughts on “Are We Listening?”