I live a short drive away from what was, until recently, known as the sex-change capital of the world: Trinidad, Colorado. As more people explore the option to alter their biology, gender issues have surfaced in so many ways it’s hard to recognize certain facets of culture we used to take for granted. There is no longer a ladies room or a men’s room for that matter in New York’s Museum of Modern Art. My Indian friend was aghast to learn recently that her 18 year old daughter’s dorm at Princeton has co-ed shower rooms, with flimsy shower curtain separating her from the male students in the adjacent stall. At a program I recently taught at a university, I was instructed to refer to one particular student as they, despite appearing as a young woman, they did not identify as either male or female. So they was not a she, as I had assumed.

These cultural changes provide the backdrop for a larger issue coming to light: gender equality and specifically, women’s rights. Is it a coincidence that the gender issue is arising at same time as #metoo? It seems there are two issues: gender fluidity and gender equality. We seem to be asking collectively, what is gender? And how do we implement basic human rights, and authentic gender equality, in the face of its evolving nature?

Gender is a mental construct: From an ultimate perspective, it’s fantastic we are disposing with entrenched labels. From another, I wonder: are we simply creating new trenches? Labels are still mental constructs, even if they do replace worn-out ideas. HH 17th Karmapa Urgyen Trinley Dorje notes:

“The social meaning of our biological differences is created by our ideas about gender that is, what gender means socially is determined by the mind, and not by the body. Masculine and feminine are fabricated identities that societies create, not nature.”

“Although gender constructs are mere concepts, we can see that they can be terribly powerful forces that shape our experiences and affect how we treat others.” 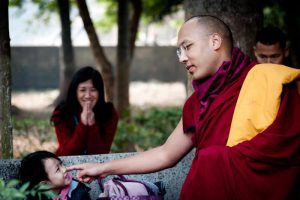 I think the most important question we can ask is not, how do women get equality in an era of patriarchy, but rather: What does an authentic, empowered masculine look like? Because if we keep insisting on equal rights for women based on a lopsided paradigm, we are going to end up in a different unbalanced situation, on the other side of the spectrum. It’s up to each of us to identify our inner masculine and feminine -something we contemplate in any tantric tradition- and develop a sane relationship to those energies. And this can’t be done on the sidewalks of Washington DC. As helpful as social activism can be, I think most of what confronts us as we untangle the knots of patriarchy is inner work.

“When a problem is rooted in society’s habitual outlook and habitual thinking, then legislating change will have limited effect. After all, you cannot legislate a change in thinking.”

What does equality look like?   It is long overdue for women’s rights, and safety, to be given the respect it deserves. But equal does not mean identical. Equality denotes balance, fairness, a portioning out of things so that everyone ends up with an advantage, no one with an advantage over another. But how can we assure fairness when each has our own karma?

“Women’s rights have to do with respecting the value of human life and freedom. It has to do with acknowledging our shared humanity and the basic human bonds that link us.”

Obviously the biological roles of men and women differ, so it’s never quite made sense to me how we can be equal. What would make more sense is to aspire to treat each and every human being with an equal amount of kindness and respect.

Equality Or Ahimsa? As we evolve into more acceptance of gender fluidity, and more awareness of gender equality, it seems to me that what we need more than a tired concept of equality. The real issue at stake here is ahimsa. Kindness and acceptance, or at least a commitment not to cause harm. Equality has to do with ahimsa.

Gender Fluidity: It’s interesting that the vast majority of sex reassignments are male to female. From a darker perspective, you might take the gender fluidity we now insist upon as another attempt to appropriate the feminine. This darker view might see the patriarchy plotting against women as we stand up and demand justice from oppressors. As if saying: society accepts this shift in consciousness, then let’s attack the very foundation. Let’s deny the paradigm of femininity itself. We’ll kill mother nature at its root – denying the importance of our physiological roles, and so anyone who wants to can simply change their minds and decide to call themselves something different.

So when I hear about gender fluidity, and the pronoun they I have a hard time understanding. It seems pretty clear to me that if you have monthly periods and the ability to bear children, you are a woman. If you don’t have this possibility, then you are a man. Forgive me if this seems to black and white, but manand woman are different than masculine and feminine.

From a Meditation Viewpoint: Mind is neither male and female. All of my teachers have taught that both men and women have an equal opportunity to attain enlightenment. But Padmasambhava is recorded as saying that all other factors being equal, a woman is more likely to achieve enlightenment:

“The basis for realizing enlightenment is a human body. Male or female, there is no great difference. But if she develops the mind bent on enlightenment the woman’s body is better.”

This then begs the question: where are all the women teachers in Tibetan Buddhism? And how do we contextualize – and accept – the sexual escapades of male teachers?  Tenzin Palmo asked her teacher Khamtrul Rinpoche why he thought there were not more female incarnations. He replied:

”My sister had more signs at the time of her birth than I did, and when she was arriving everybody said, ‘wow, this must be some really special being coming.’ but as soon as she was born, they said, ‘Oh, we made a mistake!’ You see, if she had been male, they immediately would have tried to find out who this child was, and he would have been given a very special kind of upbringing. Because she was only female, she was not given a chance. She had to marry and so on. This was the problem,that even if you came back as a female it would be very difficult to receive the kind of training and opportunities you could get as a male.”

Karmapa writes in his book, The Heart Is Noble:

“ I think a note of caution is in order here. Although there may be aspects of Buddhist teachings that can help us in thinking more wisely about gender issues, I want to warn you against looking to Buddhist societies to provide ideal examples of healthy gender constructs and practices. You should expect to come across things you do not want to adopt for yourself. Not everything in Buddhist institutions is perfect, and this is certainly the case when it comes to gender discrimination.”

I appreciate the openness and honesty of recent months, but where does this leave us? I have watched over and over the splitting of sanghas due to the misbehaviour of teachers. And yes, #metoo.

#metoo: I was groped by one of my yoga teachers, Pattabhi Jois. I did not speak up. Nor did any of the other many women I knew who he had touched inappropriately. Why did we remain silent? Because our voices had been cut off at an early age: the rule as a young lady is that you don’t cause conflict or confront injustice directly. I hope this movement of sharing can help us show up and educate men and women to be kind and decent human beings, so we can shift the tide to make respecting women and the power of the feminine the norm and not the exception.
Karmapa writes:

“If we continue to devalue what women have to offer, we will continue harming women and continue overlooking and devaluing these virtues that are considered feminine and these are precisely the virtues that the world needs most now.”

Letting go of identity: How do we as practitioners let go of fixation on identities while acknowledging this re-balancing of power. How do we say with a straight face that there is no gender, while supporting a woman’s right for basic human dignity and respect?  I understand the value in thinking about ourselves as human, rather than as men or women. But middle path is not neither. Middle path arises when we have 2 distinct polarities that play off of each other. If we lose the polarity, we lose the juice. Karmapa reminds us that gender constructs are nothing more than social fabrications.

Without attention to the details of our worldly experience, the fabric of our society may unravel. As practitioners our greatest contribution is to embody the wisdom of a larger view while embracing compassion as we meet each individual. A graduate of Naropa University’s M.A. Contemplative Psychology program, Kim Roberts has been a devoted student of Ashtanga yoga and Dharma since 1992. She spent 15 years living in South Asia and now makes her home in Crestone, Colorado, where she is finishing her second book, Toward A Secret Sky: A Guide To The Art Of Modern Pilgrimage, to be released in Spring 2019. She also makes encaustic art. Learn more at KimRoberts.co or KimRobertsArt.com