If you wish to make an apple pie from scratch, you must first invent the universe. Carl Sagan 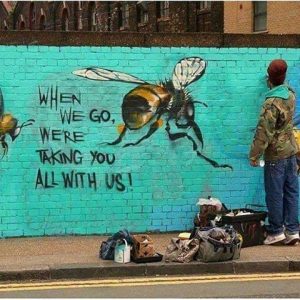 Pesticides and disease-bearing parasites are decimating the bee population in the US.  10 million beehives have been wiped out.  In reality, these pesticides and fungicides being poured into the earth by farmers in order to increase their crop yield for profit contaminate the pollen which, when examined and fed to healthy bees, was found to have a significant effect on their ability to resist infection from parasites.

The increased use of agricultural chemicals are destroying the pollen on which the bees feed.

This is happening, not only in America, but in Europe.  In France, the death rate was more than 60 percent.  In the UK, honeybees my become extinct within a decade.

In Britain, a government minister warned that honey bees could be extinct within a decade. A third of what we eat and much of what we wear is dependent on pollination by honeybees.

Brian MacCallum, who I knew from my younger days, has taken an interest in bee-keeping. He now has several books published.  Among them is A World Without Bees, written along with his partner, Alison Benjamin.

It’s thanks to these authors amongst others that they are helping to make plain the impending disaster of losing our bee population.  The ecology of the world can be both resilient and fragile.  The profit-driven motives of farmers in using harmful pesticides has to be curbed.  Of course, the earth will eventually heal itself, but we can help by increasing awareness within our own lifetimes.

The British Government has given permission to sow bee-endangering seeds across the country.  Take action now by signing the petition:

[Bayer is suing *Europe* for saving the bees] 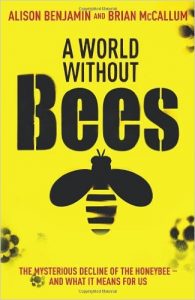 PERSONAL STORIES
ARE THERE ANY BODHISATTVAS IN THE ROOM?…KARMA CHANGCHUB
THE TREK TO MOUNT KAILASH IN TIBET…ANDY LOWE
WILD WHITE HORSES…LAURIE ANDERSEN

POETRY
WHEN YOU ARE OLD…WB YEATS

VIDEO
ALL IT TAKES IS 10 MINDFUL MINUTES…ANDY PUDDICOMBE

We need your contributions for our next issue. Please send us your articles, reviews, comments and creative outputs to:

To receive regular updates of news and views posted on the MANY ROADS website, please Join our Mailing List.   All you need is an email address.