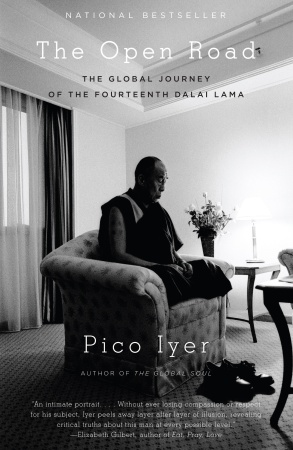 In 1959 the 23 year old Dalai Lama arrived into Delhi having safely escaped Tibet. The low profile news reached a Hindu Brahmin from Bombay who was then Professor of Philosophy at Oxford University in the UK, researching into Mohundas Ghandi. He lived with his wife, also a scholar from Bombay, and their small son, Pico. At the first possible moment Iyer senior boarded a boat and sailed to India to meet the young Dalai Lama, five years his junior, acutely aware that, ‘A great treasure had come out into the world for the first time really, in history’. The two men developed a strong friendship. At the age of 17 his son Pico was privileged with an introduction, and that friendship continues beyond the death of his father, until the present day. The relationship is clearly unique, Iyers speaks of their meetings over thirty years with a sense of intimate camaraderie, and he appears to have a rare ease of access to His Holiness.

The book contains a long and familiar reading list that Iyers used to prime himself: ‘The start of any book is an exhaustive reading……… to see what has been done already and what does not need to be done again’ and so gives us wonderfully considered insights into the daily conundrums facing the ‘God-King’ of Tibetan Buddhism, insights that challenge any tendency of the reader to deify. Iyers himself states early into the book that he is neither Buddhist nor Christian, however not a page turns that does not convey the basic principles of compassion, kindness and sensitivity to fellow humanity, leading one back to the question placed by Dzongsar Kyentse, ‘Who is not a Buddhist?’

He says the DL’s position is, “In the deepest sense, if we can live free of ceremony and superficial tradition, the Dalai Lama, Tibet, Buddhist temples won’t have to exist at all, as long as we keep the principles they represent behind us”. This theme is common throughout the book, and reiterated by the DL’s younger brother when he, perhaps controversially, says, “In the future I think people will follow the principles laid down by a man called Gautama. But the word Buddhism may disappear. Which is fine: we don’t need the name”.

There is much attention paid to the frustrations of Tibetan youth, especially those born and educated into India but tied into their culture, history and head of state. The Dalai Lama struggles to realign the bond of allegiance which so often is misinterpreted: the demand by Tibetans for their country’s independence does not yet convert to personal autonomy. As long as he is alive, he holds by default the responsibility for each of his countrymen’s spiritual security.

The Open Road ventures into politics, philosophy, science, monkhood, and the future. Pico Iyers examines the complexities of the Chinese relationship with Tibet, and the way in which Buddhism is being absorbed into the west. He recounts a conversation with young Tibetan students, “We sometimes say that people want to enjoy the food of Tibetan Culture and religion, but don’t care what’s going on in the kitchen” and “Please could you tell Westerners that we are proud if they enjoy our spiritual life, but what we care about now is politics?”

It is a book full of grounded truths and insights from one who is fully embedded in his own being, sensitively witnessing the life of a similarly grounded if somewhat over travelled, self disciplined, endlessly kind and wise monk who also happens to be called the Dalai Lama.

It is a beautiful read.