Since returning from the ‘big ride’ ­ over two years ago now ­ I’ve been clocking up quite large mileages. What with 4­ – 5 sessions a week of cycle training with schools during term time, occasional rides up to Scotland to visit a Buddhist Centre and trips to visit friends and family, I’ve been covering about 8,000 miles a year. All very well for maintaining cycle fitness and my green credentials as a cycling commuter but it’s not exactly touring.

I’ve been passing myself off as a ’seasoned’ tourer since finishing the circumnavigation [Ernie cycled around the world in 2005] but have not yet completed the classic, must do tour in the UK, namely the Land’s End to John O’Groats, or vice versa, ride. So, the long summer holidays of 2009 are approaching; the last School courses will be finished by the end of July; it’s time to “knock the bastard off” as Sir Edmund Hillary said in 1953 on his return from the summit of Mt Everest.

Having talked to all and sundry about doing the ride (I always find this the best way to motivate myself into getting started; it sort of ‘locks’ one into it with so many people informed) the choice of route crossed my mind. Should I do a north­south or a south­north? I chose the latter based on the rationale that the prevailing wind would be behind me. Although just as many people seem to do the ride the other way and don’t report it being any more difficult. Since it’s such a well traveled journey, and not wishing to reinvent the wheel, I decided to download the CTC’s recommended route and use that as a basis for my ride.

My map preference since army days has always been 1:50,000 OS sheets. These are ideal in terms of detail for both walking and cycling, although on a bike, the distances covered mean carrying lots of maps. On walking trips in days gone by, eg Pennine Way, I’ve often cut up strips of OS sheets showing just a few miles either side of my route in order to keep the weight down. This can become rather wasteful, not to mention expensive, though. CTC recommend purchasing a Philip’s road atlas with loose leaves and one of those plastic spiral ring binders. These give ample detail for road cycling and, 22 of the appropriate pages taken out and carried in a plastic folder, doesn’t add significantly to ones load.  Apart from minimal shading and the occasional ‘crow’s foot’ arrow on the roads, there is of course no contour detail, so some of the hills come as a bit of a surprise.

Train was the obvious mode of travel down to Penzance, the nearest station to Land’s End, so on the 13th July off I went to Piccadilly Station in Manchester to book my ticket for the end of the month. Although friends keep telling me that it’s cheaper to book in advance on line, I like to do these things face to face across a counter. However, I might just take their advice in future; it cost me £83.80 for a single journey, this included a discount for my old codger’s rail card. And the journey can’t be done directly these days; three different legs; two changes. What a palaver! Bring back British Rail. Hitherto, I’ve always toured for my own selfish pleasure or sense of achievement.

Hitherto, I’ve always toured for my own selfish pleasure or sense of achievement. However, a couple of days before the off, people where I now live suggested that I should try and raise some money for a worthy cause; put my efforts to good use so to speak. They suggested the Harley Slack Fund. Harley is three years old, suffers from Meningitis B and has had all four limbs removed. His full heart­breaking story can be seen on http:harleyslackfund.giving.officelive.com. It transpired that two cyclists from Stockport, Mike Hulbert and William Watkins, had set off from John O’Groats on the 25th July heading for Land’s End in order to raise money for the fund. What better than for me to add my efforts to the cause. I hastily designed a simple sponsorship form and distributed it around various people and organisations I thought likely to contribute. All done in a bit of a last minute rush but we might just raise a few bob.

On Thursday 30th July, out came tent and sleeping bag from under my bed, camping stove and cooking equipment from the cupboard under the kitchen sink and an assortment of clothes from out of the wardrobe and four panniers were filled ­ with too much kit as usual. The alarm was set to allow me enough time to eat my now customary bowl of porridge, load up the bike and pedal down to Piccadilly in time for the 7.26 train to Birmingham New Street, the first leg of my journey to Penzance.

I fell asleep wondering how long the ride would take.

Ernie Buck is 66 years old and has lived in various parts of Yorkshire for the last 30 years. A continual commuting cyclist,he has done a number of long distance solo expeditions within the UK, but dreamt of cycling to India and beyond for years.

Having arrived in India in early 2006, Ernie continued on around the world and made it back to Liverpool 17/12/2006, across the Atlantic aboard the vessel MV Reinbek some 17 months after he left the UK in July 2005.

In 2009 Ernie did the Land’s End to John O’Groats cycle ride.

The next episode of Ernie’s journey will appear in the February edition of Many Roads. 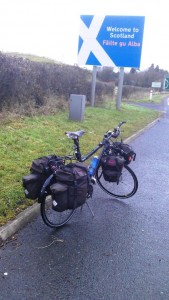