A Bird in the Hand but Nothing for the Soul
By Milissa Burkart
Tulsa, Oklahoma: Storybird Studio, 2007. One-of-a-Kind. 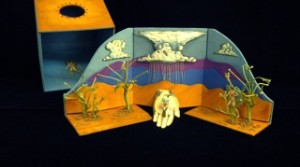 85.5 x 4.5 x 4″ closed. Covered wire. Stained glass. Gouache on binders board with found objects. Composed of two pieces: box with peephole on top; drawer that pulls out to unfold the ‘story.’

Milissa Burkart: “The Bird in the Hand piece is, very generally speaking, about unrequited love.”

While “unrequited love” might suggest gloom, this tableau of sadness and silent melancholy is paradoxically a joy of discovery. A peephole begins the fun: turn and tilt the box to catch glimpses of what the shadows obscure; pull the drawer slowly, tilt it forward – a bird in the hand; remove the drawer completely, open the triptych structure and behold Eros(?) almost offstage, hidden by barren tress in a parched landscape, separated from potentially vivifying rain. This is a romantic relishing each nuance of hurt. 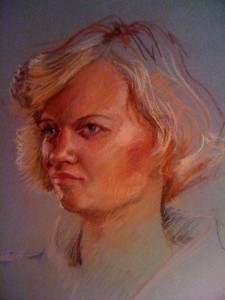 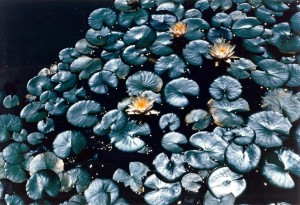 Scott Shepperd
BFA in Design at OU
I also have training in cabinetry and woodworking.
Currently, I am a remodeling contractor, specializing in kitchen and baths.
This photo was taken at Philbrook pond.  The sun was directly over head, and what I like about the shot most was the surrounding darkness of the photo with the reflective specks of sunlight breaking through.