Buddhist/Hindu Newar Festival to mark the death of the Demon 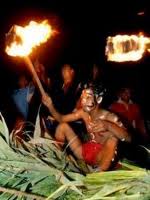 Gathemanga is celebrated in Kathmandu Valley in July which signals the end of the rice planting season and marks the beginning of the autumn festival season. The festival represents a ritual detoxification of the city or is observed as the day of eliminating the evil “Ghantakarna”, giant demon. According to a local legend, there used to be a demon named Ghantakarna (Ear with bell) as he had a pair of bells on his ears (Ghanta means ‘bell’ and Karna means ‘ears’) who terrified the people by stealing children and women and demanding money and other gifts from the villagers.

The farmers were very scared of him and did not dare to go out even in the planting season. The villagers were helpless.  But one day a large number of frogs came to rescue the people from the tortures of Ghantakarna. The frogs started to croak so that the demon got restless and tried to catch them, but the frogs jumped ahead and led him towards the swamp and hopped into the water. The demon also plunged into the water to catch the frogs, but the frogs swarmed all around his head and sank him and he drowned.

On this day the effigies of the monster that is prepared of green reeds (Phragmites karka) are erected in different crossroads of the town in the daytime. At the end of the day, the effigies are taken down and are dragged to the riverbank for a funeral ceremony to drive away the demon from the locality. In the evening householders, especially from Newar houses, place pots of cooked rice, blood and the lungs of animals, eggs, among others along with Gathamuga swan (flower) known as Dronapuspa in Sanskrit (Leucas cephalotes) at the crossroads as offerings for the evil spirit. 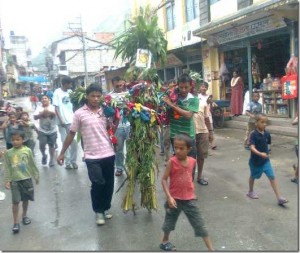 Preparing for the street drama

To mark the death of the demon, every year a legendary drama is acted out on the streets as a part of the celebration during this festival. As a token of appreciation, the frogs are especially fed by the farmers on Janaipurnima. During this festival, farmers offer rice and lentil soup to frogs in gratitude for a good rain for farming and a token of appreciation for killing Ghantakarna. The ceremony is known as ‘Byan (frog) – ja (rice) – Nakegu (feed)’, or rice feeding of the frog. 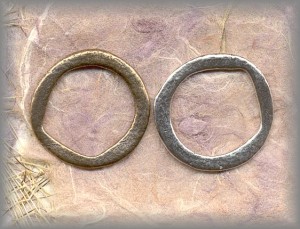 Iron rings worn on the finger to ward off evil

Three-legged iron nails are then hammered into the door lintels to keep the evil spirit out once the offerings are made. The Newari people wear iron rings on their fingers with a belief that they are protecting themselves from the demon Ghantakarna. On this day a special dish- Samaya– of garlic, onion, flattened, meat, and beans and different varieties of traditional Newari food are served in the home.

Dr Sangeeta Rajbhandary is Associate Professor in Systematics and Ethnobotany at the Institute of Science and Technology, Tribhuvan University, Kathmandu.