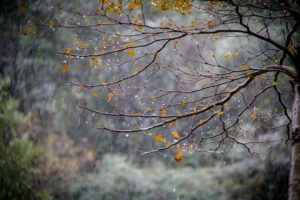 In NATURAL MEDICINE by Kate Roddick

I felt on top of the world, with my letter of introduction to the Dalai Lama, in my pocket, close to my heart, we tickeled tocked, tickeled tocked, into the train station at Patankot. The mist had fallen onto the paddy fields, and plains left to right of the old sleeper train, in the misty morning and my heart seemed to be gently pounding to the anticipation of just getting out onto the platform. I had shared a four tier bunk carriage with two nuns and a very large Indian lady whom was coming up from Old Delhi to take the mountain air and by pure chance to also visit a Tibetan Doctor.

After a little bartering with the mini bus driver, the four of us alighted with a lot of luggage as I had with me two trunks , which I had brought all the way over from Nepal. One trunk was my kitchen things, the other personal items. We were on our way up the two hour drive to Dharamsala, Northern India, in Himachal Pradesh. Dharamsala is a small hill station known as Little Tibet and the home and residence of His Holiness the 14th Dalai Lama. 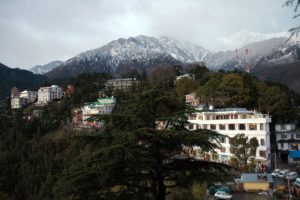 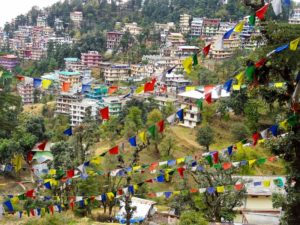 I was to get used to this route in the years to come, but this was the first time I had gone over the Sutlej bridge, and it was by habit, that my travel companions told me, that one was to take tea and puris in the little tea house just after the river before we climb the foothills towards the Kangra Valley. The fields around the farmsteads were bright yellow mustard and the wheat fields a beautiful comparison of green. Ahead was the powerful beauty of the Dhauladhar range, snow peaked splashed by the morning sun. We were getting close to our destination, and everyone started to show signs of excitement. The nuns chatting at half a dozen- reminiscing stories of His Holiness’s annual teachings this time last year. As we approached Lower Dharamsala we passed the Tibet College of Tibetan Medicine, the Menzi Khang. And my heart missed a beat with the anticipation of learning there. 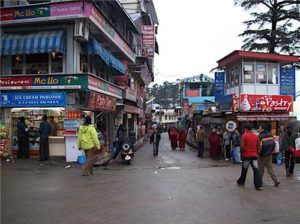 When we arrived in McLeod Ganj, I embarked and decided to stay in the most expensive accommodation, for just one night – my thoughts were to ground myself, in luxury, before embarking on the simple life of learning  the Art of Tibetan Medicine. My Tibetan Dharma teacher, the very Venerable Thrangu Rinpoche had given me a letter of introduction, to be passed to the Dalai Lama with a gift from him of a Khatak, the traditional white scarf lamas and lay people use as an offering. He had also given me a gift to pass on, which I had in my luggage. The Tibet Hotel, is a short walk from the main small square of McLeod Ganj, not far from His Holiness’s main monastery. I was elated to be amongst the Tibetans and their community. I booked into the concierge, with a sense of coming home, with a mixed sense of importance and vulnerability was upon me! I needed food, and looking past into the bar and dining room, I felt too shy to go in. Everyone in there, seemed important, no wonder, as they were mostly dignitants and knew their purpose. It was a little like passing the bar of Claridges in London, wealth and specialness. I was not in that category, so I went straight up to my room, which happened to be a large and simple, with an en suite bathroom at the top of the Hotel. I ordered tea, and fell into bed, rejoicing with the knowledge, that this was a safe juncture, a turning point, to an unknown destination.

Whilst I lay in bed I decided that, if I were to live here, I needed friends, and I needed simply enough for the five fingers on my hand. What I needed for the years to come was, the spiritual teacher, a teacher of Tibetan medicine, a translator, a Western girlfriend to go around with and be my pal, the family with children. Thrangu Rimpoche said, I need not to worry about a thing, all would come into place, I had the letter and yet it seemed, no-one had studied Tibetan medicine before, yet it would happen. And I dropped off to sleep!

I awoke and looked out of the window, a vast expanse before me, of the valley below the shack like houses below the window. The beauty of the mountains, a little like being in Shangrila. And that is what it felt like. My new home. I heard a sound beyond my bedroom door, and listened. Beyond the door, I heard a voice, in English, and with an English accent. This voice was talking about medicine. I opened the door, on my way to take some breakfast and saw before me, a long trestle table with about five people on it talking. On this table were lots of biscuits, note books and a man at the end, talking about Tibetan medicine. I could hardly believe what seemed like a dream. 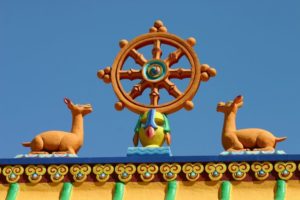 I went over to them and said hello. I said almost spontaneously, I think I am supposed to be on this table with you and introduced myself. The man at the top of the table, was hesitant and wanted to hush me away, but I said, in my English voice, but can you help me here, I have a letter here too, and showed it to him. This happened to be Dr. Barry Clark. The only English Westerner, whom was qualified to teach Tibetan medicine, whom held his class on this very table on the top balcony of the Tibet Hotel, with his few students. And they had just begun their lessons that very month.

After seeing the letter, he asked me to sit down, he said, if I were to study with him, I was to be conscious, no messing about, and the commitment was serious. He then started again on my behalf with the introduction of the text (again – as his students had you realize had already begun), the Gyu Shi, The Four Tantras, in the formal manner, and invited me to sit down and join, my new friends. My first qualified Tibetan Medical teacher, and I was on my way. You couldn’t make it up if you wanted to. And I was overjoyed, and then the story began. I was blessed. Dr. Barry Clark introduced me to that massive blessing, of studying Tibetan Medicine, and without him, this long life of study would never have happened. My first friend and mentor in Dharamsala. 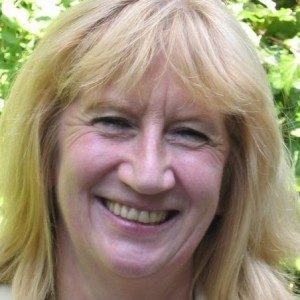 Kate is unique, being one of the first ever Westerners ever to study traditional Tibetan medicine in Dharamsala. This was no mean feat, spending seven years within the monk community next to His Holiness Dalai Lama’s residence, translating Tibetan texts to enable her to study medicine with some of the greatest Tibetan physicians of our time. This was borne out of her deep dedication to of wishing to help others. At Napiers the Herbalists. She also holds workshops on The Art of Tibetan Healing and the Five Elements. She spends much time attending retreats these days and has a darn good sense of humor.

Regards to Kate for letting me share this article (Ed.)

The article first appeared in Levekunst art of life.