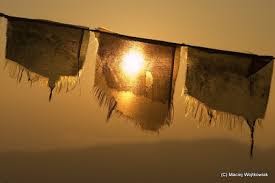 Day dawns.  Early morning standing in the doorway of the little courtyard of Shinji Butt. Outside, pigs are grunting about in the mud.  A little boy squats and defecates while a multi-teated sow waits behind for him to finish.  A goat, wearing a yellow sweater, its front legs inserted into the arms, munches grass at the side of the road. 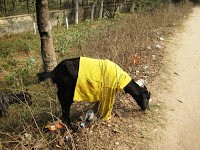 Inside the lodge, embers from the previous night’s celebrations, set into a square bed of sand with a parapet of bricks around the edges, still smoulder and glow red in the middle of the open yard.

The fog of the previous day has cleared, revealing cold edges and carved roundels on the lintel at the entrance to the shrine room.  Staff move around, here and there, lightly brushing the paving with a besom, clearing the corners of cobwebs that glisten in the grey, morning light.

Slowly, we leave the temple and make our way to Maha Bodhi for our morning perambulation around the walkway bordering the quadrant in which is set the main temple area.

Clearly, in my head, is the sound of the Japanese monk, Ryosho Shimiza, playing his ancient sho with its bamboo pipes standing erect.  He follows spider-like notation penned in meditative harmonies that have strange, other-worldly dischords. 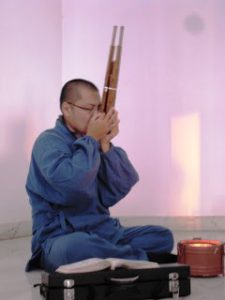 The instrument is blown and sucked; the disparity in the harmonies sends shivers down the spine – dissonant , flowing, pensive sounds.

In the evening, we sleep well and waken the next day to a bright, clear and crisp morning.

Around midday we leave Bodh Gaya in a hired car for Patna.  The journey through dusty Bihari towns and villages takes 3 hours.  Our journey will continue from Patna to Guwahati, the capital of Assam state in the north east.

Alighting from the car with our baggage, we are suddenly in the chaotic traffic circle in front of the entrance to the station. We enter the concourse and walk around the various families and individuals camping on the floor of the reception hall.  Those who are awake stare at us as we make our way to the waiting room 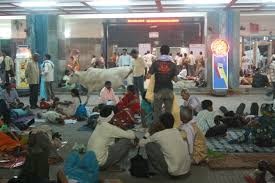 As in all of India, real information is very difficult to come by and we know the train is late, but by how much we don’t know.

We find our way to the ladies’ waiting room.  One old lady is making a fuss about there being men in the room although they are obviously with their families – wives and children.  I have to leave.  But the general waiting room has an air of depression that overwhelms.  The bright overhead lights, the resigned hunched postures of the waiting passengers, the smell of vomit from a corner where someone has thrown up is overpowering and sends me back to the ladies’ waiting room from which I had been ejected.

By 12 midnight, according to the electronic notice board, the train will be at least 4 hours late, an increase of 2 hours on the last bulletin.

A descent down the worn stairs, past a beggar wearing shorts to  show off his chronic leukodema:  the poor guy is a sickly white except for brown panda eyes; and on to a “help desk” where my wife has already been and where she was told, “No rooms available”.

I try to get a room.  At the help desk, the clerk and his assistants speak no English.  I get passed from one to another and every time I start to communicate with them about getting a room somewhere in the station, they all cast their eyes down and giggle.  Eventually, I manage to communicate and I’m given a room, number 4 somewhere along from the waiting rooms upstairs.

I pay the Rs 780 (about £9) and a coolie in regulation maroon uniform takes us along a dark passageway past a restaurant that is closed and we come to a door with a padlock. We leave our bags and progress, feeling exhausted, to a dark alcove in which there is a raised deck.  A peon is asleep on a raised, concrete platform.  He peers at us from under a blanket.

We waken him and he rubs his eyes and gives us the key for the padlock.  We return to the door, open it and enter a large square room that could double for a multiple occupancy prison cell in Saudi Arabia or Syria with a palette and mattress in the middle of the room.  Using our own sheets on the thin, lumpy mattress to lessen the chances of being bitten by bugs, we flop down and sleep a dreamless sleep with the fluorescent light blazing above our heads.

As we can’t hear the announcements from the tannoy every hour or so, I have to traipse downstairs to check the bulletin board for any hint of the arrival of our train; and it’s back to a short nap in our torture chamber, the lower wall splashed red from the expectorant release of pan disconcertingly the colour of old blood. 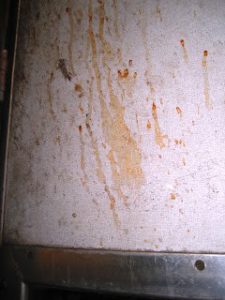 At 4 am the board still states our train will arrive at 2 am.

Standing outside, I suddenly I hear that the train is arriving at the station.  The coolie has failed to wake us to take us to the train and the peon is fast asleep again under his blanket.

I waken my wife and send her downstairs to fetch the coolie while I pack and pile our luggage outside the door.

THE TRAIN IS NOW ARRIVING AT PLATFORM 2, I hear over the tannoy.  It’s the North East Express to Guwahati.

Just then, my wife arrives with the coolie looking guilty.  We shake the peon awake and shove the door key at him then rush downstairs, the coolie carrying our bags on his head.

Across a pedestrian bridge we go, weaving in and out of the crowds.  My wife is running ahead. The train has come in from Delhi and we have only about 10 minutes to find our carriage and get our bags on the train – and there is a really, really long train of carriages.

Just in time, the coolie finds our carriage about halfway along the platform, and we settle into our sleeping quarters.

On the way to Assam, our train is delayed again and we don’t reach our destination till past midnight the following night…altogether a 33 hour journey from Gaya to Guwahati. 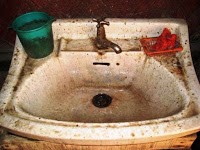 A friend has booked us into the Surya Hotel but the place seems locked up for the night.  Raju, our friend, phones the hotel and eventually a young boy opens the hotel door and takes us up to our room.

After the filth on the train, the room sparkles.  At last, we have a shower and sleep. 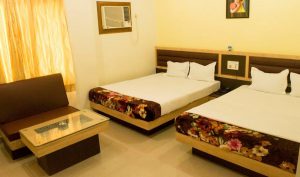