An enforced week of being stuck indoors, due to illness, had me reflecting on an email I received recently from a friend.  My friend had attended a large Buddhist gathering which, on the whole, she had enjoyed but she also wrote, ‘I didn’t feel there was much kindness going on’.  Her words struck a cord with me because I knew exactly what she meant.

In work situations where we have to take part in various seminars and presentations, we rarely expect to come across examples of kindness or caring.  And when it does happen, we are usually pleasantly surprised because it is seemingly ‘out of context’.  But, for a Buddhist, when we attend teachings or centres or study groups and come into contact with fellow Buddhists, there is maybe a certain amount of expectation that we will be, at least, kind to each other. There is always so much lofty talk about compassion and Bodhichitta, and aren’t we encouraged to aspire to become Bodhisattavas?  So, why is it often so difficult for us to just be truly kind to each other?

It may be that when we attend these large Dharma gatherings and are caught up in the moment that we simply forget what it is to be kind.  Perhaps we are so in awe of the teachers and will do anything to be near to them that we don’t notice someone sitting next to us who is having a hard time. And maybe the teachings we hear so many times just don’t reach our hearts but stay closed in the part of our brain that tells us that we are ‘good Buddhists’ because we have a great teacher and receive deep teachings and know all the right Buddhist buzz words. But, still, we don’t know how to be good human beings.

A number of years ago I read a book titled Random Acts of Kindness (365 Ways to make the World a Nicer Place) by Danny Wallace.  Danny is an English author and ‘personality’ and the reason for writing the book was to document an experiment where he tried to form a cult, just to see how easy it was to do that. He realised early on that any cult or group needs a common purpose or goal and he decided that his cult would have the common goal of random acts of kindness.  It’s an interesting book because it starts off just as a kind of a joke and develops into something rather profound.   At the end of the book, the readers are encouraged to take a pledge to perform random acts of kindness (which are anonymous). And what are these kind acts? It isn’t giving large amounts of money to good causes; it isn’t anything big at all.  It’s something as simple as smiling at a stranger or giving up your seat for someone, leaving a biscuit on a colleague’s desk just because they look a bit down.  And the biggest realisation that came to Danny? It’s, as we all will know from Dharma teachings, that just from performing these random acts of kindness, we will feel good too!

HH Dalia Lama is known for saying that his religion is kindness and we all solemnly bow our heads in admiration of this wonderful human being.  But why is it so difficult for us to follow his example? Most of us will not reach the level of a Bodhisattva in this lifetime but what we can do is simply be kind to each other.  And as we watch the Dalai Lama meet someone, and he takes their hands in his and he smiles and looks into their eyes, can’t we see that he is giving us his greatest teaching? Because it is something we can all do. We can all make kindness our religion each and every day.  As His Holiness says: ‘Be Kind whenever possible. It is always possible.’ 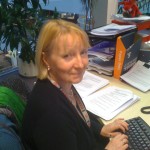 Margaret lives in Scotland and has been trying to understand and practise  Dharma for about forty years. She has been a student of Ringu Tulku since 1993.

2 thoughts on “Kindness by Margaret Ford”