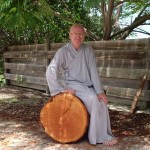 I’m not at all sure how we all in the Bodhicharya Sangha developed the merit to be able to meet Rinpoche in this life – but somehow the good fortune has come to us, each in our own different way, and I think now we  just have to see how much further we can clarify our own minds, develop our compassion and so be able to offer something back to others.

I’ve been asked to write something of my own story as a Buddhist but I am already rather aware that everyone has their own equal story, and am only too aware that one’s own appeals most of all to oneself, aside perhaps from one’s mother, and is probably best not too much bought forward or considered except perhaps as a useful rememberance: to give thanks for the good fortune we have encountered and feel remorse for our mistakes.  And so give rise to a wish to develop the paramitas more deeply.

I was born in England not that long after the Second World War of a Jewish father and Christian mother in fortunate circumstances. There was time to be schooled in quite a good way and time even to glimpse something of the happiness and sacredness of life, as well as to feel its impermanence and suffering. Sent away to an Anglican boarding school with a chapel and many services this was all rather forgotten in student days.

But then, while travelling out to the West Indies on completion of engineering studies, I was somehow fortunate enough to meet a young American woman who had lived with a Hindu teacher as her student and who took the time to teach me yoga and meditation – pretty odd practices in seemed to me! After some time and with her pointing it out I slowly realized – meditation really changes things! Previous religious admonitions, though sound, didn’t seem to deliver the tools we would need to make good on its advice. This was a wonderful step forward and I’ll always be grateful to her and for that year, most of which was spent in the US Virgin Islands. There I started zen practice with a fellow seeker a bit more advanced than myself.

The 70s and 80s were spent working in the Leeward Islands and practising as a lay Buddhist. Doing many many things – some conducive to developing the paramitas and others not very much so at all. At the end of the 80s I thought it would be nice to offer something back to the island people who’d often been good to me in an unconditional kind of a way. I thought the best thing I could offer would be meditation and something of the Buddhist path and so I left the islands to become a zen monk in the late 80s. They seemed to me to be the professionals.

In 1996 I was studying as a monk in our zen monastery, now classed as a senior monk, when Rinpoche somehow decided he would like to visit us. I heard he was staying at Samye Ling at the time. It was a bit of an odd request for a Tibetan lama – but the arrangements were made and it wasn’t long before we had the good fortune of listening to him give a commentary on the ‘Heart Sutra’. This I very much enjoyed, but more impressive was his disposition – it seemed he was somebody who had really actualized the end of suffering and the ‘noble happiness’ to a very deep and real extent. In all my years listening to masters and teachers of different traditions this was a first for me.

After his visit I heard something about tonglen practice and how it could help develop compassion, kindness, patient endurance and the noble happiness. I already had some familiarity with metta practice from staying in Theravadan temples, but this seemed to go further. Within the constraints of the monastery I did some research.

Two years later I was asked to start a zen temple in Edinburgh and two years after that I found Rinpoche was in town and giving talks. I attended these, but the highlight of the week was his visit to our small temple. Quite a few of our sangha were there. We questioned Rinpoche for some time. I asked “Why are our zen monks so serious and you Tibetans seem to be more happy, more relaxed”. He answered with a smile. “I think maybe some of our monks are not serious enough! Maybe we can learn from each other”. I went on to question him about tonglen and was able later to buy a copy of his ‘Mind training’ – out of print at the time. At the end of the visit he said “We must do this again ” but I remained silent as I was planning to leave Edinburgh and return to the West Indies.

By the end of 2002 I had completed my time in Scotland and was sailing out to the islands. Small groups were soon established in four islands which continue to this day. But then three years ago I found myself concerned about developments in my home monastery and when the concerns were raised the response made me feel I had no future there anymore. I asked for a sabbatical. This was granted. I planned a solitary sail around the world, a goodwill voyage. But I was unable to find a sponsor in the short time slot available so I flew out and joined a fleet of boats sailing from Ecuador west across the Pacific and on around the world.

Yet by the time we reached Tahiti I felt this wasn’t really working for me, wonderful though the sea and the islands were. A kind Tahitian lady who had a Tibetan Buddhist temple in her garden allowed me to stay. After eight days of sitting, the thought quietly came to me: “I better go to Sikkim and find Ringu Tulku and learn how to practice tonglen properly”. It was late April and as I still had his e-mail I sent off a request – but received no reply. I soon found out he was about fly to Scotland and teach there. I flew back to the UK, almost exactly the other side of the world from Tahiti, to join Rinpoche at his classes in Glasgow and Samye Ling  and later with the Dalai Lama in Nottingham.

During this time it very slowly dawned on me I might become one of his disciples. I was still keeping my monk vows. I decided to resign from my zen monastery and took the necessary steps. Now back at Samye Ling, I asked Rinpoche “Could I become one of your disciples?” and he said yes. And then I asked him if I could become one of his monks and he said yes again. This was great good fortune indeed! This meant I would not just meet him from time to time, but might really learn from him. I was to become one of his disciples, one of his monks, part of his lineage! Later that year, in August, Rinpoche was giving the wonderful mahamudra instructions at summer school and I had the good fortune to attend this and meet more of his sangha.  The ceremony to join his lineage took place in Bohdgaya the following year, after having spent several weeks at BMC in Sikkim, a time very precious in my memory.

So now I’m back in the islands again, still a zen monk really but now with a little knowledge of Tibetan teachings. You could say I’m a Mahayana monk. And with me is the Frenchman and novice monk Lamten, who Rinpoche ordained this April in Dublin. We are keeping up our practice and seeing if we can help here a little. I remember the Dalai Lama once saying “Don’t worry how you help. When things are not good, whatever you will do will be an improvement”. And there is room for improvement in the islands. So I feel confident that something can be done. We can all do something. And then, ‘a little bit by little bit’, we aspire to become a little bit more like our teacher and can only wonder more and more why he ever came over here to bother with us all in the first place. This though is somehow our great good fortune. And in our following on and offering back is his completion. And also for us: following on in this way we come to our own happiness and our own completion.

With much gratitude, kind thoughts and prayers, to Rinpoche and the wider Bodhicharya Sangha.

3 thoughts on “Many Roads Before Us by Karma Sonam Rinchen”