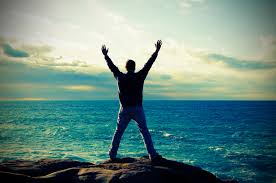 On the forklift truck on a grey morning Boz had a dream.  It was always the same dream; he was a man of stubborn allegiances and wild expectation. His luck would turn and he would retire to the seaside, the English seaside. He’d been happy there. Not so much the overpowering smells of vinegar, frying fat and sugar, nor the noises of crowds, amusement arcades, having fun. Even as a child his ideal was to do nothing. Contentment was lying in a deckchair, soaking up the sun which drenched his memory, and watching the sea come in, go out, come in, go out. His mates jeered at the smallness of his dream; they wanted world travels or at least Thailand or Tenerife every winter if their ship came in. Val had dragged him abroad of course, but the ocean was never the same, too tame, too distant, too fringed with the young and sleek. He knew where his dreams were to be realised and soon he knew when and how.

The dream took a lurch nearer and upended the forklift. On the ramp, maybe the wheels weren’t squarely on. He howled when lifted out and was signed off sick for six weeks. The company could find no malfunction in the forklift and alleged driver error, but Boz’s union rep was having none of it. “Mr Boswell has an exemplary record and there was another similar incident here with a truck some six years ago. He is now incapacitated and we have a medical report to indicate whiplash injuries with some trauma to the lower and cervical spine.  It is unlikely he can work again, we are told. I would suggest the fair way forward is a one -off payment, equivalent perhaps to three years’ salary. That way we can avoid any question of blame, or escalation through the Health and Safety process.” HR, as usual,  said nothing remotely useful; management said “Two years. Terrible worker anyway. Cheap at the price to get rid of him.” The haggling ended up with a nice little nest egg for Boz who was always careful to walk with a stick and a wince. There were disability benefits as well.

Val wanted to chuck in the part-time job at the drycleaners and go somewhere exotic, maybe even move to a little flat in Spain. But Boz knew he had to wait for his luck to flow in again. He went into training, absorbing himself in daytime TV, especially the property programmes and the surprise makeovers. Fortune favoured the bold, those who seized the tide when high. Then he went on the internet. It was a shock to discover how little his lump sum would buy, especially with anything that would pass as a sea view. He’d told Val, “What we need is a nice little place, with a sea view, maybe do it up a bit (he had a sudden fantasy of himself holding  a paintbrush), live well, away from all this.”

He found the auction houses for repossessed or unloved properties, got very excited by this lot or that and was cast down when the bidding went above his ceiling. He told himself he was just learning the ropes, realised what he needed was a property no on else wanted. And he needed to go to the auction house, not follow online. The next sale he waited for the fancied flat , bid fast and hard, but again it outstripped him; on impulse born of rejection he went after one for which no one else was bidding. He’d looked at it briefly, definitely sea view, bit back of beyond, a kind of chalet with two bedrooms. Very cheap. He couldn’t remember more – a scattering of neighbours, no pub (but who could afford to drink out these days?), not too far from Scarborough. But raised his hand anyway. The dream was docking. No one else bid, though he was aware of a kind of subdued ripple running through the room – amusement, excitement, applause, he couldn’t say. It was his.

Now he had to explain it to Val. She wasn’t thrilled but suggested they visit. The owner met them with the words, “You do realise the bid is a binding contract and you can’t change your mind?” Val was looking out to sea. “What happened to the garden fence?” “Bit of coastal erosion. You’ll have seen it in the report. But you’re cash buyers  so no mortgage to worry about. “

Boz said slowly, “So things do fall in the sea?”

“Yes, but it’s quite  a long garden. Most of the neighbours have put in coastal defences – quite expensive but effective. When I moved here twenty years ago, the surveyor said 70-100 years. You don’t need longer than that, do you?”

“As long as it lasts our time”, said Boz. Val gave them both the look she had perfected on clients bringing in embarrassingly stained garments. “We’ll have to make the best of it. But what’s that caravan near to the road? Is that part of the sale?”

“Not officially”, came the reply, “but I’ll throw it in for goodwill.” Val had always fancied a caravan and this appealed to her as a space soundproofed against Boz’s bellows for beer and snacks. The journey home to pack up their lives was less fraught than it might have been.

The paintbrush fantasy faded like sea mist, but the chalet was in fair shape. Boz soon settled into the deckchair, basking in the garden on the better days where there was even a tree to act as a natural windbreak, or gazing out of the sun lounge otherwise, while Val sewed or watched her portable in the caravan. The summer was a good one if not as golden as Boz’ s memory, but knowing good luck came in threes he waited for something else to fall into his capacious lap.

The winter was another matter; the house was ill-insulated, the window frames rattled and the draughts had the chill and persistence of benefits advisors. A calm March day drew him down the garden. The rest of the fence had gone…but something else. The rhubarb patch, a bank of nettles, a recycling bin were away. None of them were much missed but this was his domain and he was uncomfortable.

The next year the vegetable bed went – undug, overgrown but the unease persisted. His neighbour Frank said, “What do you expect? We’ve all paid up for coastal defences so the waves are funnelled directly at you.”

Boz went to demand help from the Council. The letter back said, “While we have every sympathy with your plight, we are informed you bought the property while being aware of the problem. Given the many demands on our budget, we regret etc”. 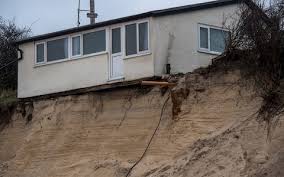 Year four was frightening. A sea surge took a messy predatory bite which swallowed the bench and the tree. Val moved permanently into the caravan. Frank advised, “Think about moving. A house fell in the sea five miles down the coast.” But Boz was planted.

Year six Val moved back to live with her sister in a house on solid ground; he simply found her gone like most of the garden and half wondered if the sea had taken her too. Now when Boz looked out, the sea seemed suddenly huge, its glittering hungry, the land fragile and friable. He cursed it for wrecking his dream. One day he awoke to urgent banging on the door from Frank and the men from houses further along. “Time to leave. Storm surge coming. Take anything you need.” They helped him clear essentials to the caravan. A TV crew turned up to record all this; he’d always wanted to be interviewed but not like this. Then with an almighty crash, more cliff fell, taking half the house with it. The Council later demolished the other half.  The footage brought Boz some celebrity, but also attracted the attention of a benefits adviser who had observed Boz moving a large TV with no sign of strain.

He feels cheated, robbed. On good days he sits out in the deckchair  and waits for his luck to change. He stares at the sea wondering if it is friend or enemy. 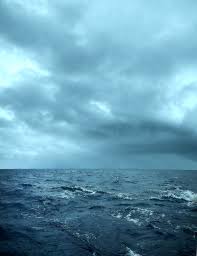 KD lives in Edinburgh and writes for pleasure and distraction.