The Ballad of Charlie MacRae

Many think when a rainbow hangs over the hill

That it harbours a crock full of gold,

A deity worshipped by those who believe

That love can be purchased or sold.

Sir James had a beautiful house in the glen,

And when he was forty years old

For lending his name to an eminent cause

He was given an ingot of gold.

A lady of infinite charm,

If brought to his household and given his name

She would socially strengthen his arm.

But she sat in his cold house and stared at the moon,

Whilst he sat at the opposite side of the hearth

In love with his ingot of gold.

She frequently saw a young shepherd pass by

With his dog on the way to their sheep.

And the trill of his whistle and lilt of his song

Often roused her tired heart from its sleep.

Young Charlie MacRae had a croft on the hill

His grandfather’s long, long ago,

Which he shared with his dog and a white whiskered cat

And the wind and the rain and the snow.

One morning when James had gone off in the Rolls

To survey his assets in town,

His gold and his silver his stocks and his shares

And had Krugers stayed firm or gone down?

Meg followed the whistling ‘til under the clouds

She came to a little white house,

So little compared with the houses she’d known

It seemed scarce enough for a mouse.

Upon coming closer she saw with surprise

There was never a key to the door,

And feeling secure in a mantle of trust

She ventured inside to explore.

She smiled; it was surely a man who lived here,

Those old pots and pans on a shelf,

The table and chairs and the wag- at- the- wa’

And an old rocking chair for himself.

When Charlie returned with his dog to their house

And found Meg inside with the cat,

He brewed up a drink in an old battered pot

For she thought it the loveliest ever she’d had

Whether Champagne or Chartreuse or Rhone,

As if by some magic a god had prepared

An elixir for her lips alone.

For the whole money market had flopped,

And from what he could see there was no guarantee

That a run on the banks could be stopped.

When the Rolls brought him back to the mansion that night,

He sat to his meal quite alone,

Never noticing, lost in concern for his gold,

That a treasure far greater was gone.

And when he was fully aware of the fact

And sat to take stock of his life,

He found that the loss of a mountain of dross

Was of greater concern than a wife.

So she stayed there with Charlie and still darns his socks

And welcomes him home from the moor,

And although she no longer wears dresses of silk,

For the moon and the stars have their sparkle again

And the sun greets the dawn with a shout,

And their little house glows in the warmth of their love

And a peat fire they never let out.

They treasure the sunshine and welcome the rain

And offer their thanks every day

For their sweet daily bread and their warm double bed,

And the laughter of children at play.

And now when a rainbow hangs over the hill

And the clouds drift away far above,

James looks out and still sees a wee crock of gold,

And Charlie a world full of love. 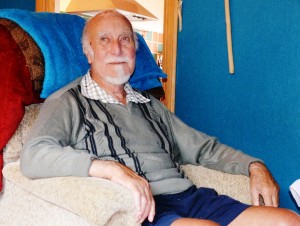 Dan Cavin is an farmer, builder, sculptor, artist and poet.  He lives in Kinlochleven in the Scottish Highlands with his wife and cats.  Recently, Dan celebrated his 88th birthday.

This poem has a similar theme to Muna Madan by the Nepalese bard Laxmi Prasad Devkota: the outcome of choosing material wealth over emotional happiness resulting in the loss of the latter.

Dan retains an extraordinary memory for reciting poetry and plays.  [See The

1 thought on “POETRY BY DAN CAVIN”