the majestic steamer
slips into the sea-
first voyage

the pills in her pocket
eventually identifying
the lost Irishwoman

anchor, propeller
side-scuttle…
these rusticles
a hundred years
in the making 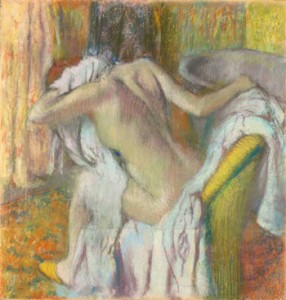 Bare-legged, in light, pale clothing,
three young women stand on an urban rooftop;
New York, probably, or some other big city.
They are letting the wind dry their hair
while white garments sway on a line behind them,
and the chimney beside them casts a long shadow.

It is 1912, and Sloan’s subjects could be sisters:
one redhead in a green skirt, one brunette, one blonde.
The brunette looks approvingly at the redhead,
while the blonde brushes her hair which hangs
like a curtain, her head titled to the right,
the left hand on her hip for balance.

I imagine they are chatting about the night before;
what they did, who they saw dancing, girl talk.
One of them could be softly humming
After The Ball or something jazzy;
no World War to bother them yet, and no Depression,
this year forever marked by a ship called the Titanic.

This is how I would like my three sisters to be;
close, relaxed, hanging out happily,
the brunette smiling at the redhead, the blonde
still long-haired and carefree, and me,
the youngest girl, looking on
from the gallery, taking it all in.

West African proverb:’When an old man dies, a library burns to the ground.’

Book by book, a library burns down
when someone dies in Africa; the fire
consumes the memory, the sensorium.

And when he lights his robes of orange-brown,
the monk rejects the puja, picks the pyre
as, book by book, his library burns down.

Three hundred people in a Midwest town
were burnt alive like blossoms on a briar,
with loss of all those memories,sensoriums.

Before he left,prognosis barely known,
my father trudged his way through the quagmire;
then, book by book, his library burned down.

The seeds of our dejectedness were sown
when that disease took hold and made a liar
of her clouding memory, her sensorium.

And when at last I’m put into the ground,
or else cremated, ashes back to Gaia,
book by book, my library will burn down,
consuming, then, my memory, my sensorium.

resting in the empty sandal 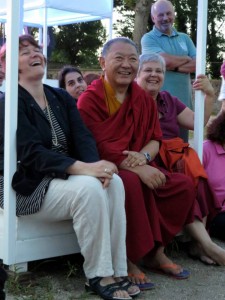 Maeve with Ringu Tulku Rinpoche at the Summer Camp in Portugal

Dubliner Maeve O’Sullivan’s work has been widely published and anthologised for twenty years. Her collections  poetry (Vocal Chords, 2014), are from Alba Publishing. www.twitter.com/maeveos