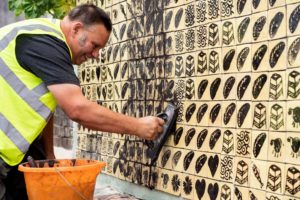 Pollinators and public art: how one Cornish seaside town is creating a buzz

Like many seaside towns in the UK, St Austell has suffered from changing holiday habits (even before the pandemic) and the decline of the fishing industry. A new arts project aims to reverse its fortunes – and that of the bee,

Artist Alex Murdin is sharing his ambitions for Whitegold, a cultural regeneration programme, which, under the umbrella of the Austell Project, seeks to rejuvenate the seaside town through art.

Like many coastal UK towns, St Austell has suffered from changing holiday habits, and the decline of fishing and industry. Once world-renowned for its china clay pits, which supplied the potters of Stoke-on-Trent, the quarries began to be abandoned last century and the Cornish town fell on hard times.

However, following the success of cultural regeneration projects in other seaside towns, such as Margate, in Kent, St Austell is now looking to art – specifically ceramics – to spur positive change.

But as Murdin said, it’s not just about “plonking a few sculptures around St Austell and hoping that somehow it transforms the place”. Local people have been invited to play a role in the transformation.

Nowhere is the spirit of collective endeavour more evident than at Biddicks Court (main picture, above), where an uninspiring public space has been transformed by a mural made of 11,000 handmade tiles. 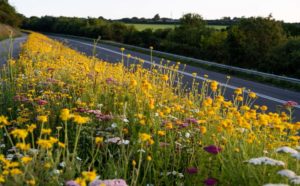 The Garden Route rolls out a colourful carpet for visitors arriving in St Austell by car. Image: James Darling

Some 800 local people helped make the giant mural of a Cornish black bee, which, like St Austell itself, has endured through difficult times.

“The Cornish black bee seems to be quite resistant [to colony collapse disorder],” explained Simeon Featherstone of Parasite Ceramics, the ceramics practice that led the project. “It has shown itself to be plucky so it seemed like a good metaphor.”

As well as celebrating pollinators, the Austell Project has also sought to boost their numbers by planting wildflower meadows along the A391 into St Austell. The so-called Garden Route rolls out a colourful carpet for visitors arriving during the summer, and is the first of its kind in Cornwall.

To read the rest of this article log on to positive new lifestyle. at Positive News