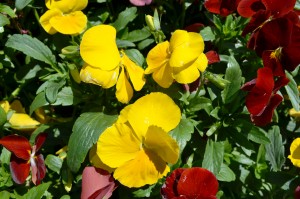 Death to me is something that is perfectly natural. Of course, as a boy and as a grownup person, like most people, I think have some feeling like this: they avoid thinking about death because very few people actually want to die. One of our firmest attachments is to life itself. And yet if you understand that this here, this Samsara, has only relative reality and if you can really experience emptiness, then I can’t help remembering what Tai Situpa said to me, “Your mind never dies.” – Harold Keith Milward, August 22, 1915 – August 14, 2015

My family and I shall sorely miss Harry and his ebullient greeting when we visited him: “Hellooo! Come in!” He had a way of making each of his friends feel special. We met Harry when, at the kind suggestion of Gelongma Tsultrim Zangmo, he stayed with us in Cheshire to break his journey south to see one of his sons. The first time he came to us was some months after the death of his wife Gwen, whom, sadly, we did not meet. I said, “You must miss her very much.” His face crumpled a bit when he replied, “I do. Every day I miss her dreadfully.” Then his face lightened and he continued, “And, yet, because of my meditation, I also have joy.” I was intrigued and inspired that Harry was able to hold together profound grief – and joy! That was the beginning of many conversations with him.
It seems appropriate to mention Gwen in giving homage to Harry, because almost every time we were with him, he talked about and praised her. Together they had four children, of whom Harry was exceedingly proud, and who themselves comprise a fitting tribute to Harry and to Gwen. Richard, Angela, Tim, David – and their families – all possess the finer qualities that I came to cherish in Harry: he was and they are kind and hospitable, charming, thoughtful, perceptive, playful, and very good at whatever each of them does.

Somehow, when I moved to Eskdalemuir, I became one of the people who helped Harry set down his memoirs. He talked, and I typed. It was fascinating to witness in this way a life that extended to a century, and Harry used his considerable energies to fill his life. I liked to watch him chuckle over some of his memories – how as a teenager he built a television set using the motor from his mother’s vacuum cleaner; when he entered a motorbike race; how as a young Army officer he upstaged his superiors with his dancefloor prowess; that he generally followed his own propensities and avoided conformity.
He was a questioning and inventive child. He won a scholarship to a prestigious boy’s school.

He joined the Army and took radar to India during World War II. He showed photos of the strikingly good-looking young man he was with his lovely Gwen and children on a beach in Cyprus, where he was stationed immediately after the War. As a peace-time officer back in England, he studied physics and later taught it. He became an international business man. He, with Gwen, read everything they could find about meditation and spirituality. They became part of the Gurdjief group.

When he was retired, Harry visited Samye Ling at the start of it and had a couple of interviews with Chogyam Trungpa. Eventually he moved with Gwen to Samye Ling, designed underfloor heating for the temple, and built the chalet in which he and Gwen lived and in which they died. He and Gwen completed the full Ngondro practice together in their seventies. In his eighties and early nineties Harry travelled to India to see HE Tai Situpa. During this time Harry himself gave courses on Mahamudra.
What I and others found remarkable is that Harry exuded vitality right up until a short time before he died. He talked about plans for his one-hundredth birthday party. He laughed, he retained his opinions (lots of them!), and he continued to ask questions. A recent mundane, but endearing question was about whether or not he should shave off his moustache. This harkened back to a time when he startled both Gwen and daughter Angela by shaving off half his moustache – to satisfy their opposing views about the attractiveness of this facial hair!

What Harry said that he most valued about his life was what he had received from the Rinpoches who were his spiritual teachers. In the weeks before he died, Harry enjoyed a visit and a blessing from Ringu Tulku, whom he had known for years. Lama Yeshe Losal Rinpoche, Abbot of Samye Ling, was a friend to Harry and led prayers and gave an eloquent eulogy for him in a funeral ceremony in the Samye Ling temple.

Once when Harry was talking, and I was typing, he recounted:
“[Akong] Rinpoche got everyone together [and] announced to the whole of Samye Ling that I was the only one who had understood the nature of mind, and Tai Situpa had said so. Then he called upon me to talk to everyone there. I hadn’t prepared anything. There was a part of me that was awfully embarrassed, and there was a part of me that said, ‘All right…’, and I was able to get up without any embarrassment. I talked about Samye Ling and how Akong Rinpoche had built in me the Four Foundations and that every advantage that I had realised was entirely due to Akong Rinpoche and Tai Situpa. This wasn’t being modest; it was just telling the truth.”

“You can’t really describe it. It is clearly obvious that you only can have a glimpse of the true nature of mind, and you can see that this is only the beginning of real practice. You have the whole of the Bodhisattva path stretching out into the distant hills in front of you and finishing somewhere out of sight.”

Harry, you are somewhere out of sight, but we know you are even now on the Bodhisattva path. Bless you, and thank you for enriching our lives.

Diana came to the UK from the USA, and she met Akong Rinpoche and began to visit Samye Ling regularly.  When she retired from practising psychotherapy and organisational psychology, she moved to Eskdalemuir and continues to practise learning – in other ways.