I thought it would be fitting at this time of year to remember Lama Tsering Paljor, a personable friend who passed away 6-years ago.  It didn’t take long in his company to realise what a genuine and heart-warming person he was.

In 2012 Donal Creedon led a one month retreat in BMC in Sikkim.  He taught from Tsele Natsok Rangdrol’s Lamp of Mahamudra, not an easy text by any means.  In order to retain some sort of equilibrium to the teachings which often left me confused with the complicated techniques propounded, I often found solace and balance in talking to the resident monk.

I’m not sure how old Lama La was; he had that youthful appearance, which many Tibetans have, and a calm deportment that affected all who came in contact with him.  His easy manner of speech and his openness with others put them immediately at ease, and one felt that they were in the company of an exceptional individual. 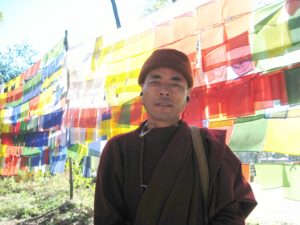 During his time in retreat in Pharphing near Kathmandu in Nepal, he told me of his practice of tummo and how he wore three sets of wet robes consecutively and dried them with the heat of his own body.  This he performed in the winter. He also joined me in qigong, together with others early in the morning after performing his ritual offerings at the fire house on the roof of the gompa. We also enjoyed watching a film about Milarepa on the laptop and he would explain each part of the story to me, especially the power of his sorcery and his later tutelage under Marpa.

Lama Paljor also liked to demonstrate his skills in singing and dancing and once led an extended session of chanting the mantra om mani peme hum in the shrine room.

In his little kitchen at the top of the building, he made chai and offered sweets.  These times provided welcome moments of relaxation.  Lama La was a gentle man and enjoyed our company.  He showed us his photographs and it was surprising to see him stand out with his long hair and beard while the others had shaved heads.

To us, the first knowledge of his problems came about half-way through the retreat.  Lama La was experiencing a burning sensation in his chest and decided that he wanted to seek medical advice.  My wife and I took him to consult a homeopathic practitioner in Gangtok and he was prescribed various ‘remedies’, but to no avail.  He was later diagnosed with cancer and the prognosis was not good.

However, he was able to travel back to Tibet and passed away amongst his family and friends.

Lama Paljor will be remembered fondly by all who met him and he will live on in their thoughts. 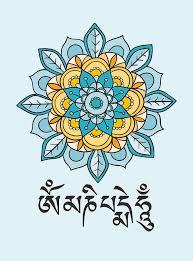