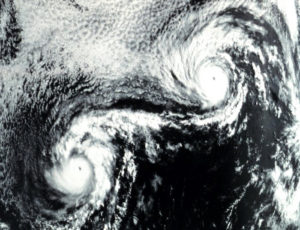 As His Holiness the 14th Dalaï-Lama says, Buddhism is scientific religion. In his first teaching the Buddha explained the universality of cause and effect: “All phenomena arise from causes”[1]. Moreover, he repeatedly asked his followers to make their own opinion, even about his own words. Buddhism considers science as a first step and also as a solution, since the root cause of problems is ignorance. Therefore, modern science too can be used on the path.

Buddhism already has its own traditional ways of explaining things… Can modern science bring anything useful or additional? The problem of Indian logic is that it is a bit cryptic and goes only one way. The core of Buddhist teachings lies in the equivalence of phenomena and emptiness, expressed in the Heart Sutra by the enigmatic statement: “Form is emptiness, emptiness is form”. Indian logic easily explains that “Form is emptiness” by endlessly cutting atoms into smaller and smaller parts[2], a result that has been confirmed much later by quantum physics[3]. However, Indian logic leaves us with no clue when it comes to “Emptiness is form”. Thanks to its exactness due to the development of mathematics, modern science can explain it very well and step-by-step. This can be very helpful because, if one that matter is not different from pure space, then one can look at things with a fresh outlook and the inquisitive eye of analytical meditation.

This lack of explanation in the traditional commentaries on how reality manifests is actually a real tragedy since it has led Buddhism to be consistently and wrongly associated with nihilism. In many places, Buddhism has indeed become like a cult in which anything is justified. Even among practitioners who avoid this abyss of nihilism, many still look endlessly for an ultimate reality separated from everyday life. This problem is so crucial that Thich Nhat Hahn recently wrote an entire new version of the Heart Sutra to deal with it[4]. He also says often that: “the real miracle is not to walk on the water, but to walk on the Earth”. My feeling is that modern science too can help to end this long-term misunderstanding and re-establish the balance toward Buddha’s Middle way.

So, emptiness manifests as something? How is that possible? First, let us see that it can actually make sense with a simple argument: 1/ Consider an empty space with absolutely nothing in it 2/ It cannot have any characteristics, because there is nothing there to talk about 3/ Therefore it cannot be empty, because ‘being empty’ is a characteristic of ‘something’ 4/ As a consequence, matter necessarily appear in that space. Therefore, an empty space cannot be empty. The key of the reasoning here is that emptiness is equivalent to the absence of characteristics.

This magic has to do with the nature of space that we actually ignore. We think we know about space. We think it is just empty and there is nothing to debate about. However, in reality, we have a lot of preconceived ideas about it. We see it as a big cube with a rectangular grid and a big clock somewhere giving the time everywhere. Objects fly into it. Einstein was fifteen when he got the intuition that this view was incorrect. He imagined himself sitting on a ray of light and discovered that no other ray of light would catch him again. His environment would disappear. Space and time would collapse for him could not be absolute. Therefore, since space and time are relative, forget about the big cube and the big clock. Space is subtler than that. Its geometry is not fixed. A young man on a bench just reduced to nothing all we thought we knew.

The big cube and the big clock are precisely what prevent us from seeing reality. It corresponds to the assumption that space geometry is rigid and smooth. But space is empty, therefore it has no characteristics at all. Its geometry escapes all description. Unfortunately, to understand space we need to talk about geometry. I sympathize with all the people that were traumatized by their maths teachers and swear that my intention is not to re-traumatize them. Geometry is simply how we measure the distance between two points. Let us take a simple example. The rigid ‘big cube’ geometry is like the flat Earth around us: it is easy to find the shortest way to go from one place to another. When geometry becomes curved, it is like considering that the Earth is round. If one wants to go from Paris to Tokyo, the shortest way on the map is not actually the best one. All planes make this journey by flying over Siberia because it is shorter. Then, let us abandon smoothness too. This is equivalent to considering the stones, the trees, the houses, the hills and the mountains on the surface of the Earth. Now, trying to find the best way is a bit trickier, because there are so many possible paths.

Space is like that, curved at large scales and rough when we look closer. In concrete terms, what does it means and what makes matter appear? There is something very special about space. The Earth surface has two dimensions, but space has three. As a consequence, this curved and rough geometry can develop and burgeon much more. Space is more like the Earth atmosphere, with all its winds and currents. Consider a meteorological balloon. On average its follows trade winds, which corresponds to moving on a flat Earth. At large scales, it turns with the weather systems, which would be like moving on the round Earth. At small scales, it is zigzagging with the local turbulence, which corresponds to the roughness of the Earth surface. In 3D, such geometry is incredibly complex and flexible.

What happens in the Earth atmosphere is that when there is too much energy, the local turbulence can transform into a cyclone. When we look at it from space, it has an eye with a round shape. This is how three-dimensional free geometry generates a ‘particle’. This eye of a cyclone is not different from the rest of the atmosphere. It is also made of air. If there is another cyclone nearby, due to the circular flows, the two eyes start to orbit around each other, which is known as the Fujiwara effect. This is how particles interact with each other through ‘gravitation’. There are no particles[5]. There is no gravity either[6]. There is only space geometry manifesting. Welcome to a new world, in which space manifest as everything we see. By the way, we usually identify with our body, but that doesn’t make sense if it is pure space.

[1] See the dharani of the essence of interdependent arising

[2] See, for example, Kamalashila, The stages of meditation

[3] See for example the two-slit experiment realized by De Broglie in the 1920s showing that electrons are like fluid.

I am French. I work as a research scientist in physics (PhD). I met Rinpoche thanks to a colleague at the Observatory of Paris more than 10 years ago. I also went to a conference organised in Sikkim with HH Dalai-Lama on science and meditation where Rinpoche invited me a few years later in 2013. I am not working at the moment. I am now in Taisitupa monastery close to Dharamsala in India (Sherab Ling) where I am in forced retreat due to the coronavirus lockdown.

Here is some info on the web : https://www.researchgate.net/profile/Louis_De_Montera

2 thoughts on “Scientific Perspectives: The Heart Sutra and the Atom”