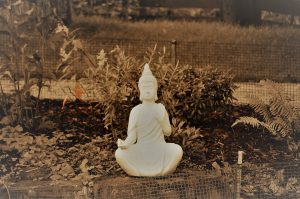 Tashi Deleg House Samye Ling, the oldest Buddhist centre in Scotland.  Summer’s end brings a breeze that blows the leaves from the trees.  Flurries of light rain precede a heavy, slanting downpour that drenches in 5 minutes the clothes that you wear.

The room we’re staying in has been refurbished with milk chocolate coloured walls and a desk fixed to the wall with a shelf above and on it an expensive silver angle poise lamp.  The room is pristine and from the window looks out to the café and the White Esk beyond fed by the swiftly flowing Clerkhill Burn.  On the bed I have my own pillow.  (There’s something not appealing about using a pillow on which possibly hundreds of heads have lain and dreampt.)

My sleep in deep and full of dreams, none of which I can recall.  Woke several times comfortable to the pattering of rain on the window.

My wife is attending the Drupchen Puja, a ten-day meditation retreat but she can do only two days.  This gives me time to wander about a bit and take some photographs, some of which I’ll convert to black and white/sepia for interest.  I plan to help David in the kitchen this afternoon.  He’s the official soup-maker and he knows his stuff.  Making soup is a learning process: he has his ‘secrets’ some of which are putting the onions in first and slowly frying in vegetable corn oil; adding herbs towards the end of the cooking; using celery at the beginning.

At 10.30 I still haven’t done my Chi Gong but after a longish very hot shower I feel relaxed and calm.

The expressoion is that in a fixed mindset everything a person does is about the outcome; while the growth mindset will add value to a process despite the success or failure of an outcome.

One interesting point she makes is about parents’ attitudes towards children and how their reactions can help develop a growth mindset.

Surprisingly, too much praise and rewards can have a detrimental effect on their development.  (I felt this when I was a teacher encouraged to make all students winners.)

You have permanent traits and I’m judging them.

You are a developing person and I’m interested in you development.

If you praise a child too much by always telling them that they are intelligent they become wary about doing anything that might change your judgment of them.  They might avoid the risk of failing and so inhibit their own development.  They may become slaves of praise.

Protecting children from failure has a negative effect on their development.  We have to be honest with them; and without criticism, tell them to try again and harder in a non-judgemental way.

Dweck mentions Benjamin Barber who divides the world into learners and non-learners. And Earl Nightingale distinguishes between “river” and “goal” people.

Goal-directed shows they must succeed in reaching a positive outcome no matter how they get there.

River types will throw themselves passionately into an activity, the activity being more important than the outcome whatever it is.

Water as a symbol for types of personality seems appropriate.

I sleep.  I wake.  The categories of types of personality dissolve in the dawn. 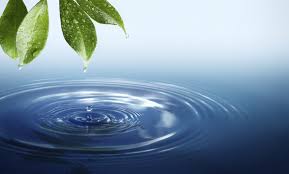