Look! – here comes a beggar, limping with every step,
His eyes raised, pathetic, adept.
A dense sadness in the silence, the light!
The string of life he plucks is worn from ages kept.
In the yard with the sunshine bright!
On one point a round tear wept,
The history of a lifetime’s plight.

Look! – look at the shreds and rags.
Ah!  Time unforsaking,
Wretched and broken on life’s worn flags
Shivering and shaking!
He spreads his bag, threadbare, flaking,
The fellow, forlorn, sags!

Look at the frost formed over the years
Fallen upon his head!
Look at the runnels formed by the tears
Meander down a face that peers;
And etched on that chest is spread
The cracks and fissures fierce.

Limping and shaking he comes to a stop,
A silent lament in the air to drop
From out of his heart, distressed and broken,
The lifeless staff his weight to prop,
He rends the heart in a voice soft spoken,
“A handful of rice!”
The one cry of a whole life,
“One handful of rice!”

Thus one man before others
From his heart doth cry.
Begging from his brothers
One handful of compassion deep
In the courtyard light
This gloomy sight!
The grieving fern doth sigh
Amid the laughter of the roses bright.

Who is this child?  Who can this be?
Whose father was poor?
Which mother held you on her knee? –
Two burning lamps for eyes, speaking, sure.
Whose hope opened the eyes, turned them free
To the eyes of the sun and the moon?
Why has it faded?  Why has it withered?
Why has this life’s light dimmed so soon?

Before Lord Buddha’s eyes
This very same beggar came.
The same form, the same sighs
Expressing a heart-felt pain.
From him passion filled the seas,
His very words sent waves abreeze:
Humbled Bali, proud and vain:
In such guise brought him to his knees.

Fallen from the blackest clouds
To enter into darker shrouds,
Is he deity or beggar?
Buddha speaks – his words pierce the heart,
Wandering from house to house, yard to yard,
Now speaking with a voice of pain:
His heart in sorrow cowed.

From age to age the ne’er–ending tears
Distilled, repeated through the years.
Through countless, opening lips He speaks!
He comes upon the earth
And from his brother begs for alms –
The beggar in the yard.

Translated from the Nepali by Albert Harris

About Albert, the translator: 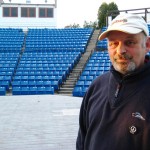 Born in the Gorbals in 1947 into an immigrant Jewish community, there was little choice but for me  to be submersed in the culture of the Lithuanian and Estonian families who had come to Glasgow along with my grandparents to escape the pogroms in those countries.

Fast forward thirty odd years along various roads, paths and cul-de-sacs, I arrived at Kirtipur Campus in Kathmandu, Nepal, the main higher educational establishment of Tribhuvan University.  There I was accorded a scholarship award, regally dubbed the Shri Paach Maharaj Dhiraj Mahendra Bir Bikram Shah Dev Award for Foreign Students.  This meagre stipend was augmented by my teaching English for Special Purposes to Newar thanka painters amongst others.

My main tasks at campus were to learn the Nepalese language and translate the poetry of Laxmi Prasad Devkota (1909-1959), the bard of Nepal.

While living in Bhaktapur, one of the three ancient capitals of Nepal, I had eventually come to the dharma via Judaism, Hinduism and atheism.  The profundities expounded by the four noble truths impressed upon me a depth of understanding which belied the apparent simplicity of ideas expressed by the statements and, in a sense, allowed me to discard the accumulation of mere spiritual knowledge accrued through the years to arrive at an experiential verisimilitude of truth.

One of the poems I translated was Bikhari, expressing the motif of suffering as a condition of being human. The poem also evokes an understanding of ‘compassion’ for all sentient beings.  The theme of Bikhari is aptly expressed in the following verse from the The Way of the Bodhisattva by Shantideva which I currently help to transcribe for the shedra, from the teachings of Ringu Tulku Rinpoche :

“For sentient beings, poor and destitute,

May I become a treasure ever – plentiful,

And lie before them closely in their reach,

A varied source of all that they might need.”

Devkota, I’m certain, had that capacity to feel deeply about the suffering of his fellow man, visibly evident in the beggar’s demeanour.