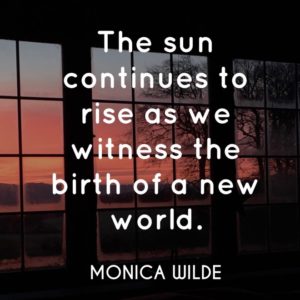 How can I speak of hope when so many have died? The tragedy is that those who have passed are all the beloved of someone who lives to mourn them. Many innocent lives cut short.

The sun continues to rise. As Francesca Melandri wrote, in A Letter from Italy, “We are witnessing the birth of a new world”. Just what sort of world it is will depend so much on the lessons learned from this and the choices we make – and I mean we the citizens – coming out of it.

Gaia is swinging the pendulum back to the centre. Our beautiful blue planet is a self-regulating organism. This is more than just James Lovelock’s hippy hypothesis. Science has shown it to be true. Our entire evolution depends on her keeping the atmosphere just right for Life. The right amount of oxygen in the air we breathe, the water we drink – life-giving. Filtering the sunlight that plants and algae convert into the food that all animals are dependent on – life-giving. Life has flourished in her mastery of ecochemistry, her juggling of the winds and rains, her influence from the deepest ocean to the frozen tundra.

Gaia has been the perfect world for humans, the most generous, most kind, nurturing and forgiving mother.

I was struck by Robin Wall Kimmerer’s reflection in ‘Braiding Sweetgrass’ of how the creation stories of different cultures led to our treatment of the planet. Her people believed that the last thing to be created was a pregnant woman who fell to Earth, vulnerable and helpless. The animals brought food and each of the plants solemnly promised to provide a gift to mankind in our hour of need – and how true the plants have been to their word! Every child of her tribe is taught to be grateful and respectful of nature. In Genesis, in the Western world, a human was also created last. Not a vulnerable human, but a ‘perfect’ man put in charge of creation, set up as master of all, with a woman made as his companion. Their first act was not one of gratitude, it was one of greed, and their punishment was to be thrown out of their perfect garden – divorced from nature. Their children Cain and Abel created war.

How different these tales are. And how different the relationships that followed between humans and Gaia. Ancestral people honoured her and were grateful for her gifts. ‘Civilised’ people have laid waste, ignoring the fine balance that makes Earth the only habitable planet in the universe. We have ungratefully trashed our home. Like a kind mother dealing with an angry, addicted, self-destructive teenager, we have been tolerated and gentled warned. But for the sake of our siblings, all other life on Earth, she has reined us in.

COVID-19 has stopped us in our tracks. Using the teenager analogy, we have been grounded, gated and confined to our rooms to reflect on our actions and think things through.

The biochemists are busy looking for a vaccine. But Gaia is the master chemist. Plants alone have been doing biochemistry for 700 million years, fungi for 1,300 million years. Bacteria and viruses were there long before them. Viruses evolved from complex molecules of protein and nucleic acid before any cells appeared on earth. In the virus-first hypothesis, viruses contributed to the rise of cellular life.

We have a choice. Do we continue to try and outwit her? Dominate her chemically, change biology, change the climate, the life giving systems and cycles, providing technological solutions to ameliorate the damage we cause?

Or do we stop and think?

Will we emerge from our rooms still determined to have our own way, fuelled by greed, materialism, capitalism, anger and suffering a disconnect from nature? A ‘hole in the soul’ disconnect that leaves us shitting on our own doorsteps, behaviour only ever seen in other mammals if they are caged.

Or will we emerge with a new understanding and appreciation for what we do have?

Giving thanks is not easy when so many have died. ‘Being grateful’ seems facetious if you’re locked up in a tiny flat with worried children, no money, no job, tense and fuelled by fear and anxiety. At 32 I was alone in a strange country with no family, no friends, no income, three small children and a stack of job rejection letters. Sadly this punishment will fall the most heavily on those least able to bear it. But no matter what happens to us in life, when everything is taken away from us, we all still have the choice of determining our attitude.

Gaia is rebalancing as we have failed to heed her warnings. We have some big lessons to learn. As a new world is born, how will each of us choose to respond?

I am so grateful for this Earth and the gift of Life. Even at this time the plants hold true to their promise to provide gifts in our hour of need. Black cumin seed, chamomile and of all things, orange peel, have all been shown to prevent SARS-coronavirus from replicating (Ulasli et al. 2014). We weren’t destined or designed to live divorced from Nature crammed into concrete boxes; our children caged and putting in more hours than the EU Working Directive to learn how to live in an artificial world; fed on rubbish and sickened by our own waste.

As a mother and a once recalcitrant teenager who made some pretty stupid decisions I recognise the words. “You’re not allowed out of your room until you’ve thought about your behaviour.”

My hope for humanity is that we all take this time to reflect – deeply.

I am a forager, research herbalist and ethnobotanist. I live in West Lothian in a self-built wooden house on 4 organic acres where I am encouraging medicinal and foraging species to create a wild, teaching garden. I teach foraging courses all over the country. I have a Masters degree in Herbal Medicine, am a Fellow of the Linnean Society, a Member of the Association of Foragers, a Member of the British Mycological Society and a Member of the Academy of Integrative Health and Medicine.

[For a full description of Monica’s bio-data please visit About Monica.]