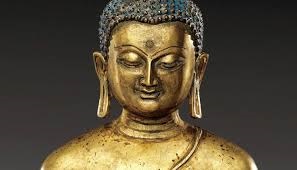 The physical reality is changing constantly every moment.  This is what the Buddha realized by examining himself.  With his strongly concentrated mind, he penetrated deeply into his own nature and found that the entire material structure is composed of minute subatomic particles which are continuously arising and vanishing.  In the snapping of a finger or the blinking of an eye, he said, each one of these particles arises and passes away many trillions of times.

“Unbelievable,” anyone will think who observes only the apparent reality of the body, which seems so solid, so permanent.  I used to suppose that the phrase “many trillions of times” might be an idiomatic expression not t be taken literally.  However, modern science has confirmed this statement.

Several years ago, an American scientist received the Nobel Prize in physics.  For a long time he had studied and conducted experiments to learn about the subatomic particles of which the physical universe is composed.  It was already known that these particles arise and pass away with great rapidity, over and over again.  Now this scientist decided to develop an instrument that would be able to count how many times a particle arises and passes away in one second.  He very rightly called the instrument that he invented a bubble chamber, and he found that in one second a sub-atomic particle arises and vanishes 10 to the power of 22 times.

The truth that this scientist discovered is the same as that which the Buddha found, but what a great difference between  them!  Some of my American students who had taken courses in India later returned to their country, and they visited this scientist.  They reported tome that despite the fact that he has discovered this reality, he is still an ordinary person with the usual stock of misery that all ordinary people have!  He is not totally liberated from suffering.

I have nothing against this man nor against modern science.  However, one must not be a scientist only of the world outside.  Like the Buddha, one should also be a scientist of the world within, in order to experience truth directly.  Personal realization of truth will automatically change the habit pattern of the mind so that one starts to live according to the truth.  Every action becomes directed toward one’s own good and the good of others.  If this inner experience is missing, science is liable to be misused for destructive ends.  But if we become scientists of the reality within, we shall make proper use of science for the happiness of all.