The following photos were published on The Cloud Appreciation Society web pages.  Their intention is to promote the value of clouds in our lives and to make us aware of the infinite variety of forms in which they appear in the sky.  For a more concise description of the value of clouds, see their Manifesto. 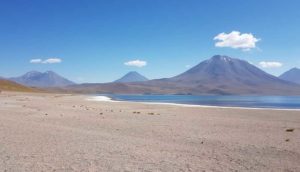 COMPANIONS OF THE MOUNTAINS:  APRIL CLOUD OF THE MONTHYou’d think that an ephemeral and etherial cloud would be an unlikely friend to something as massive and immutable as a mountain. But they say opposites attract, and it turns out that clouds and mountains get on particularly well. Take these orographic Cumulus clouds spotted by Alexandre Bernardoni in the Atacama Desert of Chile. Each one has found its own special volcanic peak to befriend.

Cumulis humilis spotted by Alexandre Bernardoni over volcanoes in the Atacama Desert, Chile. 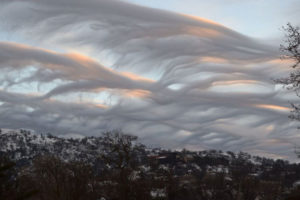 When a region of a cloud takes the form of chaotic, turbulent undulations, it is known as ‘asperitas’. The name for this dramatic, wavy cloud formation comes from the Latin for ‘roughness’. The idea for it becoming an official classification comes from members of the Cloud Appreciation Society.

Altocumulus asperitas spotted over by Kathleen Bubenheim over Stallion Springs, California, US.

A turbulent weather of asperitas clouds over Devon, UK.