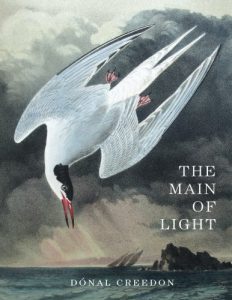 This work is the fruit of Dónal Creedon’s many years of study and practice of Tibetan Buddhism, and of his long-standing engagement with the teachings of J. Krishnamurti. He has spent many years in intensive retreat, and currently leads retreats in Europe and South Africa as well as India. He was also resident Buddhist scholar at the Krishnamurti Centre in Varanasi for a number of years, and it was during this period that the present work was conceived and executed in draft. Many readers will know him personally through these retreats, and The Main of Light will focus and give added depth to their experience of his methods.

The title of the book is taken from a Shakespearean sonnet, with an additional perspective given by Seamus Heaney. The study is organised into 15 chapters, and there are helpful biographical notes referring to the main figures of Buddhism referred to or quoted, and a Glossary of Tibetan terms. Of great interest, too, are four interviews with Ringu Tulku Rinpoche.

From its handsome cover, depicting a stylised Arctic Tern, its annual migration of thousands of miles an image of the journey to be undertaken by anyone setting out on the path, to the last pages, this book is an invitation to explore in a journey of the mind, with its hardships and its glimpses of the beauty beyond, a journey that that can have no preconceptions.

Dónal’s main aim in this study is to discover what binds and what opposes the major, though controversial, 20th century figure Krishnamurti, and Buddhist masters, many from the Mahamudra and Dzogchen traditions.  Both identify suffering as the main characteristic of human existence, and their analysis of what causes this suffering is very similar according to Dónal: craving, impermanence, attachment and ignorance (essentially the absence of self-knowledge).

An interesting discussion emerges from this notion of the ‘self’, a key concept in Western psychology. But whereas in the Western tradition, this organising principle of the psyche is essential to psychic health, for both Buddhism and Krishnamurti, this ‘solidifying of the self’ leads to dualism (the self versus the other) or to ‘the ‘heart of confusion’ as Trungpa puts it. It is an urgent message, in which Krishnamurti and Buddhism seem to speak with one voice, at its most powerful in the last chapter: to attain realisation, it is not necessary to ‘go’ anywhere, it is rather a question of a transformation of the way I see things, notably myself. It’s then that the fear and the conflict fall away; I no longer need to defend myself from ‘the other’, produced by a dualistic split. What I perceive as my ‘self’, distinct from other selves and the universe at large, is an illusion.

Divergences are seen, however, as soon as the issue of ‘path’ is evoked. For Krishnamurti, ‘truth is a pathless land’, and he has nothing but scorn for all religions and philosophies (including Buddhism), that claim to point ‘the way’, as removing us from the reality of our own immediate experience; we have already defined our destination. Buddhism, on the other hand, in its conception of the ‘noble eightfold path’ of mainstream Buddhism, or the ‘bodhisattva path’ requiring the cultivation of effort and attention, gives a broader perspective.; that the radical and immediate transformation of the mind is a possibility is not refuted; but Dónal questions whether many individuals are capable of making this quantum leap, as one who has ‘reached the roof without the benefit of a ladder’. In any case, the concept of ‘path’ can be viewed quite superficially, whereas in the Vajrayana, result – the ‘end of the path’ – is seen to be there in the individual all the time: ground, path and fruition are the same.

The same divergence is seen in respect of the one who ‘points the way’, the teacher or the guru, equally rejected by Krishnamurti, insofar as the teacher is transmitting the known through concepts couched in language. But Dónal is aware of the superficiality of this judgement. According to the tradition, for instance, Mahamudra cannot be taught, because ‘it is absolute truth and therefore cannot be expressed in words or concepts’. He is also mindful of the many contradictions in Krishnamurti’s approach: spurning books, he spent much of his life writing and publishing; refusing the notion of the teacher as authoritarian, he willingly drew into his ambit a large number of followers for whom his authority was not to be questioned.

It is clearly impossible in such a brief account to do justice to what is a very tightly-conducted argument covering teachings of vast profundity, but those who have had the privilege of hearing Dónal’s teachings and benefiting from his meditation instructions will recognise the authentic voice of the true meditator, single-minded and self-less in its quest. This is no dry, scholarly tome, but an existential call to action. In his concluding remarks, he questions whether it is useful to compare and contrast, since ‘the more important question is what is our own view and what is the basis or ground of this life? What is my life as I actually live it? Do I walk with the breath of truth in my eyes and on my very breath? Perhaps only by going deeply into these questions […] can we find out, and that is what Krishnamurti and Buddha have urged us to do’.