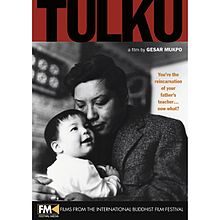 Tulku by Gesar Mukpo is a documentary about his own journey and that of other young western Tulkus who have all been recognised, when children, as reincarnations of Tibetan Lamas. The recognition of western children as Tulkus first started in the mid-1970s and the film explains how this practice has created stability politically and spiritually in Tibetan society for 800 years but has not transferred easily into western culture. For most of these young men there has been a conflict between the modern western culture that they have been raised in and the traditional Tibetan culture of their past lives.

Gesar was the son of  Chogyam Trungpa Rinpoche  and then was recognised as the reincarnation of  Trungpa’s teacher Jamgon Kongtrul. Gesar has not had a closeted monastic upbringing and with a British mother has lived all over the world in America, England, India. He is a filmmaker, has a child and obviously has experienced the ups and downs of married life. In other words Gesar leads a  very normal western life.  At the same time he is seen by many Tibetan Buddhists as someone  who is supposed, as a Tulku,  to be revered and special .  He examines not only his own life and what it means for him to have the title Tulku but travels to India, Nepal as well as the USA and Canada to meet other  western born Tulkus who are similarly struggling to make sense of a destiny that has been thrust upon them. Wyatt born in California, is studying in India  and seems more open to a  life as Tulku whereas Reuben , who was born in Amsterdam and spent three years in a monastery in India, has become cynical about the Tulku system and Tibetan Buddhism in general.  Nevertheless Reuben has decided to MC at certain festivals as a Tulku because it seems  to “make people happy”.

It seemed to me that the film, although ostensibly debating the Tulku system, also  brings up questions for all of us about how far we go in living our lives according to the expectations others have of us.  Happily, one of Gesar’s teachers  Dzongsar Khyentse Rinpoche is not critical of Gesar’s questioning of the system and he seems in fact to bring a strong dose of grounded good sense as he  asks whether it might be time to abandon the practice of recognizing Tulkus.  Ultimately Gesar himself, although clearly questioning  the practice concludes that for him, on a personal level, being a  Tulku is an opportunity to be connected with his roots in Tibetan culture.