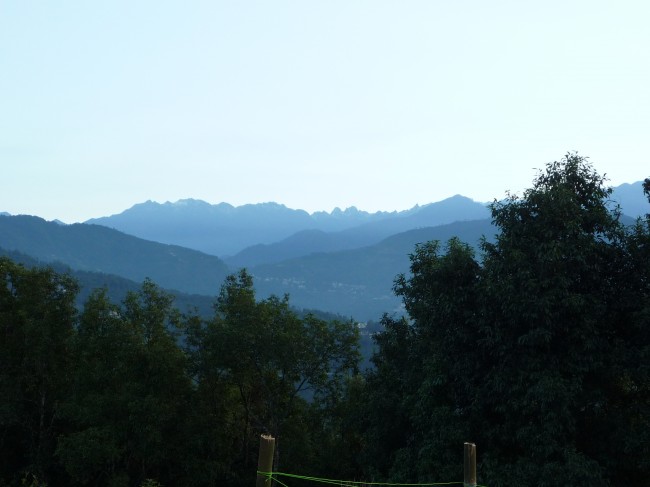 Years ago I was sent a short video taken by a student visiting Bodhicharya Retreat Centre in Sikkim with Ringu Tulku.   It was on the Bodhicharya email list – maybe you saw it too?  The filming followed Rinpoche’s footsteps as he walked down the winding forest trail to the retreat centre.  As I watched the video it looked a little bit magical but I felt quite sick because, although I felt drawn there, I was sure I would not have the chance to visit this place for many years, if ever.  As a mother of younger children, I felt I had left my travelling days behind with the old backpack I had swapped for a Volvo and holidays in Cornwall (also very lovely I have to say).  India had passed out of my league.

But then life turned rather challenging, demanding more of me than I would usually be able to come up with.  I received another email notifying of spaces on the October Vajrasattva retreat at Bodhicharya Retreat Centre.  I found myself starting to pretend quietly that I could go on this retreat if I needed to.  Vajrasattva is my main practice and 2 weeks, the length of this retreat, was how long I had decided I should give to retreat, weighing up my various responsibilities to practice and to other people.  At the beginning it was just pretend.  I could not really see myself travelling to India at this stage of my life.  But, not being entirely stupid, if I was going to continue to believe I could go I had to put things into place to make it possible, at least in theory.   So I found myself getting an Indian visa, flight details, a room reserved, should I by some miracle make it.  And I started wondering to family members if they might like to come and stay while I was away to help look after my two daughters.

As the retreat drew nearer, the problems I had sought the support of practice for, had become manageable.  Knowing a retreat is coming up is magic for me and it had worked this time.  Obviously nothing really changes except my attitude, but it gave me strength and I could support those around me again.  And things turned alright again.  Maybe Vajrasattva was shining through the stuff of life a little, albeit dimly sometimes.  But in a way he was already starting to show me more how I can be.  By now everything was in place to go on the retreat – the old traveller side of me, who knew how to organise ‘travelling’ things, was quite handy to have inside me somewhere.  It would have been rude not to go after all.

This was how I found myself following fellow retreatants down the winding forest path that descends the hillside to BRC.  It was Oct 29th – Lhabab Duchen, celebrating the day the Buddha descended from one of the heavens to teach.  It was a bit magical: the forest steaming away on either side with insects galore and massive spiders – with massive webs to match.  Orchids trailed through the trees and panoramic views stretched out at turns in the path.  I took a photo nearly every step to show the family back home.  There is no road to BRC, only this single-track foot pathway.  Everything that built this special place was carried down this path.  Having laboured taking only our small packs down with us, we heard the stories from Pema, Rinpoche’s brother, and marvelled at this feat.

We passed through the gate and were regaled with row upon row of prayer flags.  Great swathes of white billowing flags followed by rows of lapis blue, all the colours singing out their prayers on the breeze.  The centre itself has a genius and quirky design.  To the thinking mind, one keeps getting confused what level one is on, what wing of bedrooms one has walked into.   Everything is square on but the squares never join to make a whole square.  But to the heart it all makes perfect sense.  The shrine room is right at the heart of the centre, double floored with a balcony around the edges upstairs.  This balcony also houses a small library area and gives way to far-reaching views on all sides.  Below the shrine room the little kitchen leads to a dining area and on further to a terrace.  We had our breakfast usually on this terrace, looking out to the mountains with no words to disturb the wholeness.   Later on there were jolly lunches with Rinpoche here too, a big long table laid out in celebration of the days he would come and teach.  The bedrooms are arranged in wings of four rooms with a bathroom.  I know it is not your priority on retreat, but it was very nice to have hot water to shower with and clean bathrooms.  And even the toilets here must have some of the best views in the world.

Rinpoche would come and go, as his schedule allowed.  We would never know for sure when he was coming back next but we had all we needed and got on with our practice.  Every two or three days he would arrive and teach.   This balance was precious.  Then, during our afternoon practice on the second to last day, I was practising in my room.  My gaze had fallen on the movement of the greyish clouds out of the window – swirling slowly in a rhythm of their own, free to float and drift and form and re-form.  Slowly it dawned on me that they were no longer being entirely grey.  Colours were forming in the grey.  A rainbow was materialising before my eyes.  It felt auspicious and hopeful and happy.

A great big rainbow spanned the whole valley before the retreat centre.  It arched over Gangtok, the other side of the valley from us, where Rinpoche’s family home lies.  It was glorious.  A few retreatants were pacing the various rooftops at different levels, but many were locked in practice in the shrine room or their own rooms.  I’m not sure what the etiquette of these situations is but this was a rainbow to be shared.  I went very quietly into the shrine room, asking the Lama’s permission via Ani Wangmo at the front, and was given the go-ahead to tell everyone what was going on outside.  We all emerged to view this majestic example of nature being nature, our eyes looking through the practice of Vajrasattva.

This is what is, for me, the message of retreat.  The grosser ways of living are pared away for a while and allow us to see life afresh, a little more lightly, a little more as it is.  We no longer have ‘To Do’ lists.  We only really have a ‘Be’ list.  In that state the simple magic of life’s subtle, but continuous, affirmation is found.  We find ourselves with it and remember again it is everywhere:  all of life is ‘OK’.  It is all magical in its unending arising and disappearing.  There is nothing in life that cannot be OK.  Because it all hangs together in this light, ever-changing way.  Just like the rainbow materialising and hanging there while it did.  The great potential of life is held in everything.

I am one of those people who loves to be on retreat.  But I have found, for me, it is not the whole answer.  Retreat can become your prison and everyday life your soaring freedom, just as easy as the other way round.  There is a great wisdom in life that seems to balance everything out, isn’t there?  If we do too much of one or the other (retreat or putting it into practice with the rest of life), we get the signals to lead us back to more of the other.  If we stay true to our heart and the present moment expression of life – and the principles of dharma we have learnt – reality unfolds itself and dharma unfolds through us.  Well, this is my clearest experience.  And I think there is something infallible in the process.

Now at home, every time I open up my computer this picture (above) greets me.  It was the view out of my retreat room in Sikkim for those two weeks.  It reminds me; it gives me a little extra space to work in somehow: Tibet is just the other side of that far ridge of mountains. 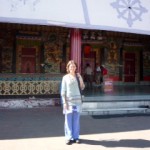 Mary Heneghan has worked as an acupuncturist for the last 10 years or so.  She lives in the multi-cultural area of East Oxford with her husband, who is a doctor, and her two daughters, aged 9 and 11.  She studied medicine and psychology before training in acupuncture and now balances her clinical acupuncture practice with dharma: following the teachings of Ringu Tulku, contributing editing work to the Bodhicharya publishing team and teaching kum nye yoga.