It is with heartfelt concern that we share this news with you about Lama Tsering Paljor, who is now facing some challenging decisions with choices of treatment for a serious health issue. Lama-la has been having medical investigations and consultations with hospital doctors and seeking alternative treatments with Tibetan doctors in Delhi.

We asked Ringu Tulku what prayers we could say for Lama, and Rinpoche responds with: 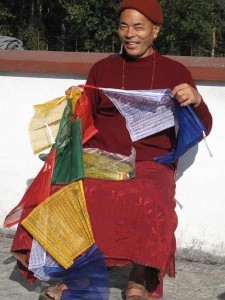 When Lama Tsering received some very tough news about his condition from doctors, Ringu Tulku said, “I explained everything to Lama, without holding back anything. He took it very well and is as calm as going for a picnic. Now it is up to him to decide what to do.”

Those of us who have had the privilege of meeting Lama Tsering will know that he radiates kindness, joy, devotion to the dharma and strength of spirit.

Thank you very much.

“Through … the practice of the Medicine Buddha … we not only achieve benefit for ourselves, but we are actually cultivating the potential to benefit others. And by doing these practices we actually bless the environment and all the beings in that environment.”

The Meaning of the Medicine Buddha Mantra 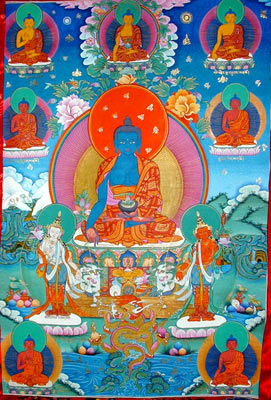 TAYATHA = Gone beyond (beyond Samsara and Nirvana)
OM = Om: jewel holder, wish fulfilling one, auspicious one. Sound of the universe.
BEKANDZE BEKANDZE = calling Medicine Buddha twice, to do away with the pain of illness.
MAHA BEKANDZE = Greatness of Medicine Buddha – to do away with the pain of illness – the darkness of Spiritual Ignorance.
RANDZE SAMU GATE =Perfectly liberated or awakened. My prayer shall go, go, go to the highest, the widest and the deepest.
SOHA = Dissolve in me. I now offer this prayer and relinquish it (to you Medicine Buddha)

5 thoughts on “Request for Mantras & Prayers for Lama Tsering Paljor”