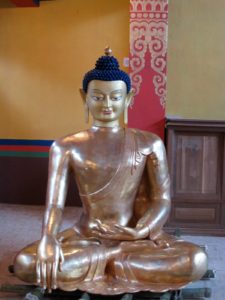 Ringu Tulku has sent us a photo of the new Buddha Rupa which is now in Sikkim, at the Bodhicharya Meditation & Retreat Centre, close to Rumtek Monastery. The statue was made in Kathmandu, Nepal and Rinpoche says it has yet to be filled and blessed with relics, prayers and precious stones, before taking it’s place on a throne in the new shrine room. He thanks all those who have helped to bring it into being.
The retreatants will come to the end of their long term retreat in the spring. Irish retreat master Donal Creedan is travelling to Sikkim next week, to spend the next few months with them as they complete the last stages of the retreat and begin to re integrate into the outside world after more than three years of intensive practise.