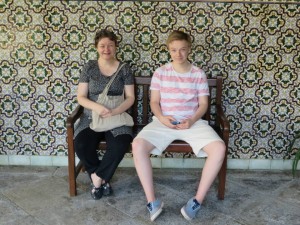 What was it that brought a change to her life?

I had a dream where I met a person, some young man.  Although I didn’t know who he was, I felt that I knew him and I was very happy in that dream.  I was sorry because I knew it was only going to be a very brief meeting and before I woke up, I heard a voice in the air saying “Karmapa, Karmapa, Karmapa”.  And when I woke up, I thought, “This is something!  This is really amazing!  What is Karmapa?”  I really didn’t know.  Then I googled and read about him.  I saw a film made by a Finnish director.  It was a documentary about two Karmapas.  I don’t remember the name of the film but that’s how I found out about this whole Karmapa situation.  When I saw the two Karmapas, I immediately knew which one it was.  That was my dream.

Ten-years ago, when HH Karmapa was 19-years old, Meena had some knowledge about Buddhism, but it was mainly academic.  She started to read more and more books about the subject, including Sagyal Rinpoche’s The Tibetan Book of Living and Dying and her interest in the subject increased.  She then became familiar with meditation techniques, especially  tonglen.  At this stage, Meena felt she had to find a Buddhist teacher and found out that two-Tibetan teachers were visiting Finland, one of them having a connection with the  Karmapa – Ringu Tulku Rinpoche who was vising the country for the first time.  I found the Bodhicharya website and found a lot of information that was very important for me.  I saw photos and pictures of people and years later, when I eventually met them, I felt that I had known them.

As far as my family and friends were concerned, they had no objection about my interest in Buddhism.  The meeting with Ringu Rinpoche was quite a big thing for me.  I took refuge immediately when he came and I started meditating much more, being inspired and enthusiastic.  But  another two-years passed  before Meena met him again.

With Karmapa’s promotion of vegetarianism, I wondered if Meena had been influenced by his cause – to impact a change in the diet of Buddhists.  I used to be a vegetarian for a few years after Karmapa asked everyone to make some kind of commitment towards changing.  I raised my hand when he gave the option of being vegetarian for some time and I decided I’d do three-years,  so I lifted my hand.  Then I got an eye problem and it was recommended I eat some fish with fatty acids.   So now I’m not vegetarian.  Also, when my family cook I sometimes eat meat.

With so much fighting in the world today, it’s difficult to ignore what’s going on and not have an opinion about the causes of conflict. Minna has her own take on this.  I’m convinced wars are caused by our mind’s negative emotions and our not understanding them; not understanding our responsibility which is the same as our freedom, actually.  We don’t understand it because nobody told us and we didn’t try.  Sometimes I wonder where the bad people are because in my daily life I rarely meet anybody cruel; I rarely meet anybody who is fighting with others; I have hardly met anybody killing or hating another.  But actually, we all have that capacity.  I think that meditation, of course, gives me space and mindfulness and awareness to notice it at the very early stage, so it doesn’t grow too big and confused.  It can also lead to uprooting the cause of conflict.

​As the bus draws nearer to Braga, Meena comments on the feeling of removal, of distance, the people have regarding politicians: One of the reasons there is war is because the people are not how we see the politicians.   There is war and injustice because we create images of other people, including politicians  We keep and hold on to those images that we have instead of just meeting the actual people – who are just like us.  We do so, perhaps, because we think it makes life simpler:  but actually, it makes it possible for us to objectify others and see them as something less, or more than a normal human being – just like myself.  That’s also how we get our own identity. 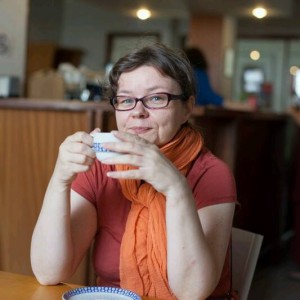 Minna is a student of Ringu Tulku since 2004. She lives in Helsinki, Finland, with her grown-up son. She is involved with Bodhicharya International website and  with coordinating the Online Shedra.

3 thoughts on “CONVERSATION WITH MINNA STENROOS”