Under the walnut tree  in Palpung Sera Nevada is both a retreat centre and a mountain farm run under auspices of Khenting Tai Situ Rinpoche, the 12th Tai Situpa.It is located two thousand meters up in the Sierra Nevada of Andalucia in Spain and is about about 3 hours drive from Granada airport.

The name of Palpung Sera Nevada was chosen for this amazing place by Tai Situ Rinpoche. It has just been completed and is now open to all who wish to develop their spiritual practice. At the end of July 2014 I have had the privilege to stay and do a short 4 day solitary retreat here. The full details of Palpung Sera Nevada are available on this website: www.palpungseranevada.com

Palpung Sera Nevada has been a labour of love for two good friends of mine, Isa and Humphrey. I first came to know Isa and Humphrey when I was running Akong Rinpoche’s Dharma centre some 22 years ago in Glasgow. I used to help Isa and Humphrey run a mobile soup kitchen for Glasgow’s homeless. Three years ago Isa and Humphrey sold their home near Glasgow, Scotland and were able to purchase 4 hectares of land and a run down farmhouse in the National Park of Sierra Nevada in Spain. They are both devoted students of Tai Situ Rinpoche and have been guided by him for over 35 years in their practice.

There are three things which make this place very special. Firstly, both Isa and Humphrey have been devoted Dharma practitioners and have experienced at first hand the difficulties doing serious practice in far flung places. They fully understand the importance of a safe, accessible yet secluded location where people on the spiritual path can do some serious practice.

Secondly, Palpung Sera Nevada caters for a wider range of practitioners. From the serious practitioner who chooses to do solitary retreats, anything from a few days to a few months, to some people who prefer to do a more relaxed informal retreat and may be even together with some of their own children. In the summer months there is a Mongolian style Yurt available in its own grounds for up to four people. This is highly suitable for an informal family retreat. In future years it is planned to construct more living accommodation for another 12 people who wish to do a group retreat together.

Thirdly, the facilities and conditions in which to do a retreat here are superb. There is now no longer the need for European practitioners to travel large distances to places such as India to do their practice. I can testify to this even after completing a short 4 day secluded retreat. The opportunities for such a retreat are incredible. This is because Isa and Humphrey have so organised things that the practitioner now has no need to concern himself or herself about seclusion, good quality safe food and their own well being. All the practitioner has to do is to practise.

For secluded retreats, arrangements can be made so that freshly cooked organic food is delivered daily to the retreat house or El Cortijito. El Cortijito is an important component to the retreatant’s stay. El Cortijito is a traditional Alpujarena dwelling house which has been tastefully and carefully renovated to retain the original ambiance of this 100 years old house but with very modern conveniences. Living here feels as though one was inside a cave. This is because the walls of this building are around three feet thick with small windows which manages to sustain an all year temperature of around 15C. This applies whatever the external temperatures; in summer, highs of 30C and in winter, lows of -8C. In winter, there is wood burning stove with seasoned logs already provided for additional comfort. 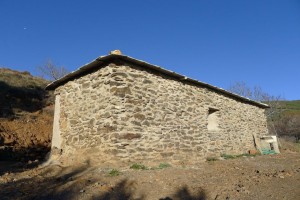 The physical location itself is a great aid to one’s practice. It is high enough up in the Sierra Nevada to be beyond the range of mosquitoes. This makes meditation practice in the open air quite feasible. There is the bonus of a fantastic, open, unimpeded view towards the Mediterranean some 50 kilometers south as the eagle flies, and even Africa under the right conditions. And then, of course, there is the deep blue sky over the Mediterranean itself. I was there at the end of July in high summer and the outside temperature was quite moderate during the early mornings and early evenings, around 15C. The best times for outdoor meditation I found was from 07.30 to 09.30 and also from 20.00 to 21.30. I discovered the prefect meditation spot right next the El Cortijito itself was under the shade of one of the 160 walnut trees. Between meditations there is ample scope to go for walks in the pristine pine forests and admire the wonderful open views of the Sierra Nevada without ever meeting anyone.All good things come at a price. The price for Isa and Humphrey was the sale of their home and other assets so that not only could the land be purchased but also the first phase of the renovations could proceed. After three years of hard work, Isa and Humphrey are now ready to welcome anyone on the spiritual path who wishes to further develop their spiritual potential. Currently, Palpung Sera Nevada is most appropriate for those practitioners who already have had many teachings and wish to put them into practice. The centre currently does not provide teachings as such but does provide all the encouragement and support needed to enrich one’s practice.

So what does it cost to have an unforgettable retreat at Palpung Sera Nevada? Surprisingly little. For people like me with an income, the suggested range of donations are as follows: [1] Short stay secluded retreats of up to 7 days 40€ per day per person [2] Medium stay secluded retreats of 2 to 4 weeks 30€ per day per person [3] Longer term retreats of several months 20€ per day per person. All these are suggested donations. The suggested donations reflect the capital and revenue costs of both creating and maintaining this facility as a non-profit organisation. For those monastics without any source of income, special arrangements may be possible if they email Isa and Humphrey direct. All the suggested donations quoted include full supply of bed linen and towels, use of electricity, Calor gas for water heating and cooking from its own natural spring. In addition to all the fresh food and the laundering of a reasonable amount of clothes, the suggested donation also includes the exclusive use of El Cortijito during your stay as well as transportation from and to the nearest main settlement some 1.5 hours drive away called Guadix. Guadix is easily reached via the airports at either Granada or Malaga. Granada airport is just 1.5 hours by bus. Malaga airport is around 3.5 hours drive to Guadix. Retreats are possible at any time of year. Even though the retreat centre is around 2,000 metres it’s southerly facing location quickly melts any winter snow.

If you would like to know more about the weather conditions here at various times of the year then just email Isa and Humphrey and they will be pleased to answer any of your questions: admin@palpungseranevada.com All reservations for doing secluded retreats are treated on a first come first served basis.I do hope you can do a retreat here soon and experience the delights of meditating under the walnut trees over looking the Mediterranean and the deep blue big sky.About the author Andy LoweAndy, for the past 25 years, has been a devoted student of Ringu Tulku Rinpoche. He retired some 15 years ago from his academic career and now is a non-immigrant resident alien retired living in Bangkok Thailand. In Bangkok he teaches basic mediation to both expats and local Thais with a non-sectarian group of Buddhists practitioners from Theravadan, Zen and Tibetan Buddhist perspectives. He continues his academic activities as visiting professor at academic institutions in Denmark, the Philippines and California where his expertise in grounded theory research is appreciated. 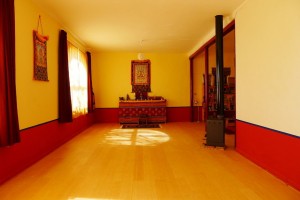 About the author Andy Lowe

Andy, for the past 15 years has been resident in Bangkok Thailand living as a non-immigrant resident alien retired.

He is devoted student of Ringu Tulku Rinpoche and in Bangkok he teaches meditation in a non-sectarian Buddhist group comprising of Theravadan, Zen and Tibetan Buddhist practitioners.  Although Andy is retired he is a visiting professor at academic Institutions in Denmark, the Philippines and California where his expertise as Grounded Theory practitioner is appreciated.

2 thoughts on “UNDER THE WALNUT TREE”