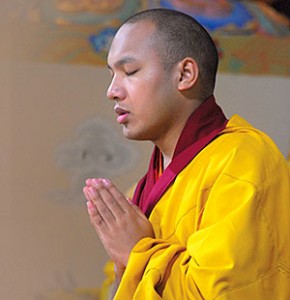 Prayer made on the occasion of the destruction caused by the earthquake in Jyekundo.

From the loftiest abode high above where Brahma dwells,
to the lowest of low buildings made of metal in the hells:
in outward appearance, their differences are great,
yet the faults of all are exposed alike, when disaster strikes.

Houses and property, stretching far as the eye can see,
and the siblings we kept close within our hearts,
are consumed together by the beast that makes the earth shake.
In this heaving there lies terrible grief.

To the piercing sound of anguished cries,
a fearsome hell breaks forth on the surface of the earth.
If even great minds find it hard to hold this,
how could we bear to take it in with our limited senses?

Lifeless bodies all about, as if dropped by torrential rains.
Buildings’ roofs cave in, as if struck by thunderbolts.
The two roar past lightning-fast, as if competing in a race
to fill earth and sky with flowing blood and flying dust.

Many are the mournful watchdogs abandoned by their owners,
many the young orphans who lost gentle loving parents,
many old couples whose cherished children are now dead,
and many whose dearest lifelong friends are gone.

All the family he called his own now dead,
one man stands alone, left behind at the edge of the world.
Staggering from the excess of his grief,
his sobs die out, as bursts of laughter take their place.

Alas! Many tens of thousands of beings die
while we watch their life force waver and slip away.
Though brief, this mere instant of sheer terror
opens a wound that will haunt us for a hundred eons.

Oh, Chenrezig, you who guard the snowy land,
your body is white as the mounds of driven snow.
Behold with your eyes of loving wisdom open wide
these poor, poor people of Tibet. Protect them, please!

Dropping their unfinished business of this life,
they crowded onto the bardo’s perilous paths,
shoved ahead in mass confusion, unprepared for their next life.

With the power of your compassion, protect them, please!

They watched transfixed as before their very eyes
those they’d loved so dearly for so long were snatched away
by that sudden demonic force sweeping through.
These left behind in its trail—protect them, please!

A race whose ancestry is shared,
the Tibetan people are united by karma and samaya,
brought together in the snowy land’s Dharma field:
May the wishes of those there and abroad be completely fulfilled, I pray.