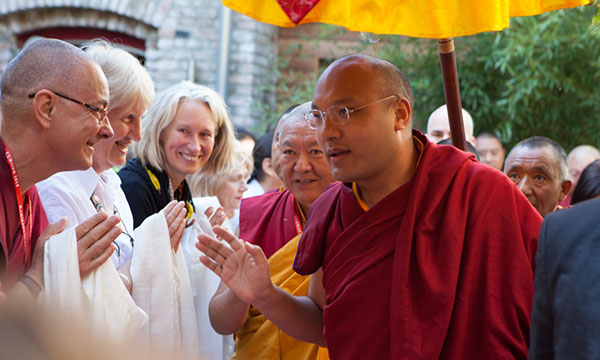 Click on the image above to see more images.

On the sunny morning of June 6, 2014 , the Karmapa and his entourage drove down Kinzigstrasse in the former East Berlin to pay a visit to the Bodhicarya center, founded by Ringu Tulku Rinpoche.  The wood fence lining the street outside the center is decorated with colorful drawings of the eight auspicious symbols, which lead up to the main gate. Its doors are opened wide to reveal a vista of the countryside hidden in this corner of Berlin. Winding paths lined with grasses and flowers wend their way past red brick, single-story buildings to the tall meditation hall at the back of the property. On top are special rooms for the Karmapa including a balcony with a view of the gardens and the surrounding area.

The architect Inka Drohn tells the history of this place:

“The land is protected as an historical site because it testifies to the shift from rural to urban architecture. The surrounding buildings are tall with many stories, but these are very small buildings, collected like a loose settlement with a lot of secluded corners. Given the way we run Bodhicarya, the nooks and corners are especially good for us, because they allow many different activities to happen without them disturbing each other. You can have activities for children as well as meditation happening at the same time.”

Inka continued, “The center is structured is like a small village nestled in the big city of Berlin. We kept the scale of the houses, but we had to change the interior of the houses to fit their use. The area covers 1800 square meters, and when we’re working here and someone starts cooking, they may think there are ten people, but then they ring the gong to say lunch is ready and one hundred turn up.”

Open to everyone from early in the morning to late at night, the center is full of activities from Tai Chi and many kinds of yoga to various levels of meditation, and even stupa building.  The members of Bodhicharya engage in hospice work and also have hosted for the last ten years, work-study seminars for students from all over the world. The center engages in interreligious dialogue and also invites teachers of different Tibetan traditions to teach. In line with the Karmapa’s deep interest in the environment, Bodhicharya is involved with protecting it and was one of five places selected for the research program, Urban Strategies for Climate Change. As a contribution to the neighborhood, the center built a playground for children. The programs at Bodhicharya are run completely on dana (offerings), so to support itself, the center rents out eight small apartments as well as renting out larger spaces for a variety of classes.

When the Karmapa came to this center of spiritual and social activity, he first stopped at a large circle of white stones surrounded by gardens so that he could bless this site for a six-meter tall stupa and lay its first building stone. He then entered the two-story open space of the main shrine hall, where the members of the community and specially invited guests waited for him.

Ringu Tulku Rinpoche welcomed him, saying, “It has been our wish and long waiting that His Holiness the Karmapa could visit this place. It was built for you, and we are in the process of adding some rooms for you, so that hopefully during the next visit you could stay here.

“This was a very old place, a ruin which the city gave us. For over ten years we have been rebuilding it, mainly with volunteer help. We got this statue of the Buddha from an artist in Munich where it was kept on its back on the street. Many Buddhists protested and wanted to take it away, but nobody came forward, so we did.” With his characteristic sense of humor, Rinpoche added, “We gave refuge to the Buddha.”

He went on to describe the environment of the center. “In thus small place, we have over five hundred medicinal plants growing and registered by a botanist. A special and rare kind of bee lives here as well as two other kinds of insects about to become extinct…. Although the place is not complete we have lots of activities going on. Every week there are thirty courses that cover topics such as Buddhist meditation, yoga, dance, and archery. Bochicharya is run as a rime (nonsectarian) center so we invite masters from many traditions as well as from the many schools of Tibetan Buddhism. We train hospice workers and have served one hundred people in their homes.  So even thought the center is not finished, we have lots of activities going on.”

Ringu Tulku Rinpoche closed with a request for the Karmapa to bless and give them guidance, to really take over this place and make it useful for many people in the future.  The monk Tenzin then read out a formal request to His Holiness, asking him “ to be the head of our center. Until we attain enlightenment, may we help you in the Buddha activity that you are predicted to perform for all the beings in the world.” Tenzin then offered the Karmapa a large, symbolic golden key to the center.

The Karmapa responded that the Karma Kamtsang seems to have a special connection with Europe. “From my information, when Tibetan Buddhism first came to the West, especially to Europe, the masters who established it here seem to be more from the Karma Kamtsang tradition, so there’s a special karmic relationship between us.

“In the Tibetan Buddhist tradition, all the different vehicles are practiced and studied, so it preserves a very complete and inclusive practice of Buddhism. Usually, we think of the Tibetan tradition as being divided between the Nyingma, Kagyu, Geluk, and Sakya. But actually, it’s not like that. When we consider the individual lineages that the lamas transmit and their main seats, these are varied; however, ultimately they are not different. They are all the Buddha’s teachings and should be practiced.

“First we should find a lama and a practice that is suitable for us, so we can establish a stable foundation. The practice of calm abiding can provide this. Afterward, without throwing away our old practice, we can practice and study in other traditions. When lamas from other traditions come to teach at Kagyu center, it provides a good opportunity for the people there. We did not have much of an opportunity to do this in Tibet.”

Turning to English, The Karmapa cautioned, “When we first become followers of Tibetan Buddhism, some lamas will tell us, ‘You belong to this lineage.’ They want us to have a strong sense that we are a follower of such and such lineage. They teach a kind of fundamentalism. Actually, a good lama should teach you how to practice, how to be a good person, to generate compassion and love. Fundamentalism is not good, and that’s why here in this center, Rinpoche invites lots of masters from different traditions and lineages. This is a great opportunity for all of you. In Tibetan society sometimes we didn’t have this opportunity; we only connected with the lamas who belonged to our lineage. I think it is very important to invite masters from other traditions.

“Finally, I want to say thank you very much to Rinpoche and to all the Bodhicarya members and staff.  I feel very grateful that on this first trip to Europe, I could come to this center. It’s very wonderful and I’m very happy. Thank you so much.“

See all the Karmapa Foundation Europe’s images (taken by our own Francois Henrard) here.

1 thought on “His Holiness the 17th Karmapa Visits Bodhicharya Berlin.”