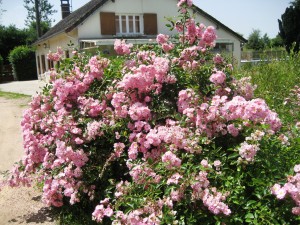 An innovative Dharma venture in the Centre of France.

For the last few decades,  particularly with the arrival in the West of  Zen and Tibetan Masters, together with the strong aura of HH the Dalaï Lama, many Westerners (among whom are many French people) have embraced Buddhism. With the setting up of Buddhist centres of various lineages, it has been possible to receive teachings and proper transmission, both by oriental and western Lamas within France itself.   This is very fortunate and should certainly awaken our gratitude for all those who have worked toward this aim and are still doing so.

However, there comes a time in life –and many of the first batch of French Buddhists have reached the stage when age and sometimes ailments prevent them from visiting these existing centres.

This is precisely at the crucial time in one’s life when one feels the need to prepare for the last journey with a proper view of the Dharma, in suitable, quiet surroundings, among friends who share  similar aspirations and under the guidance of spiritual masters and fellow believers.

With this in mind a project of a residence for elderly Buddhist practitioners was initiated.   Lama Sherab Namdreul from Yogi Ling in the Allier region was its instigator.  He took care of all the administrative procedures but, above all, ensured that the interested and involved persons had the proper spiritual motivation, the reason being that the “Oasis of Long Life” was not to be just a home for old people, but essentially a centre of the Dharma. Lama Sherab Namdreul was soon joined by a group of motivated persons prepared to take part in the project as immediate residents, future residents or benefactors. 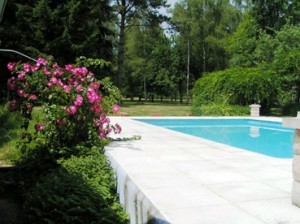 In October 2005 a property was purchased in the Cher region about 45 km south of Bourges, near a small village, comprising a home of about 196 square meter situated in a park of 3.3 hectares (approximately 7 acres), swimming pool and  large garage. The first resident occupied this house for a couple of years while a purpose-built home was under construction. Later a second person settled at the “Oasis of Long Life” and, eventually in 2009 both residents were able to move into their personal dwelling units. It is planned to construct no more than 10 to 12 houses in order to preserve a family-like living environment. All that has been achieved to date is thanks to the generosity, patience and good-will of all those involved directly, particularly those persons involved in the construction, maintenance and management of the residence. 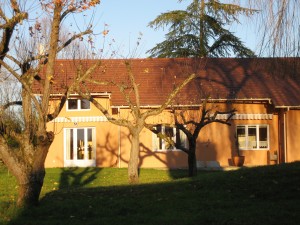 ONE OF THE HOUSES

Needless to say the Oasis of Long Life is not a sort of Dewatchen!  As we plan for the future, we still have to face various issues and problems.  Since the laws have changed in 2011, the construction possibilities are now strictly controlled  in rural areas.  Nevertheless,  we are confident, accepting the fact that this project is not only a real  challenge, but also a wonderful opportunity to practise the first paramita of generosity and altruism and an opportunity to consistently apply bodhichitta in our daily life. Considering the naturally quiet and peaceful  environment of the Oasis, one is tempted to suggest that it is a possible answer to the question put by Shantideva in “The Way of the Bodhisattva”

In woodlands, haunt of stag and bird,

Among the trees where no dissension jars,

It’s there I would keep pleasant company!

When might I be off to make my dwelling there?

With a pure Rime view, Oasis of Long Life is open to people of all Buddhist schools.   At its inauguration ceremony in April 2006, the place was blessed by Lama Sherab Dordje.  Since then teaching sessions conducted  by Lama Sherab Namdreul and Lama Wangmo have taken place on site regularly during the past years. Lama Tsultrim from Bodhicharya France, at Lusse, paid us a most welcome visit.   In 2009, Mogchok Rinpoche gave us his blessings and encouragements. We were also honoured by the visit  of  Ringu Tulku Rinpoche at the beginning of April 2010. His very profound teaching focused on the subjects of impermanence and death.   An excerpt of what he wrote in our guestbook follows:

Everybody born is bound to get old and die. It is therefore most important to make good provisions for those aged and how they spend their last days in this world. I am very happy that you try to create an Oasis of Long Life in this beautiful and quiet place abundant with nature. 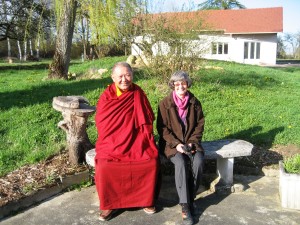 A stupa has been erected and was  consecrated. It now illuminates our beautiful park, standing among the numerous trees – a very strong and auspicious symbol indeed of our fundamental aims and ambitions.

May Oasis have, indeed, a long life! 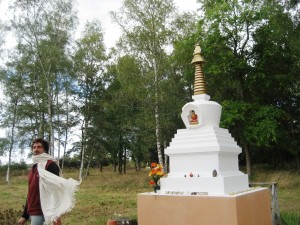 3 thoughts on “OASIS OF LONG LIFE”