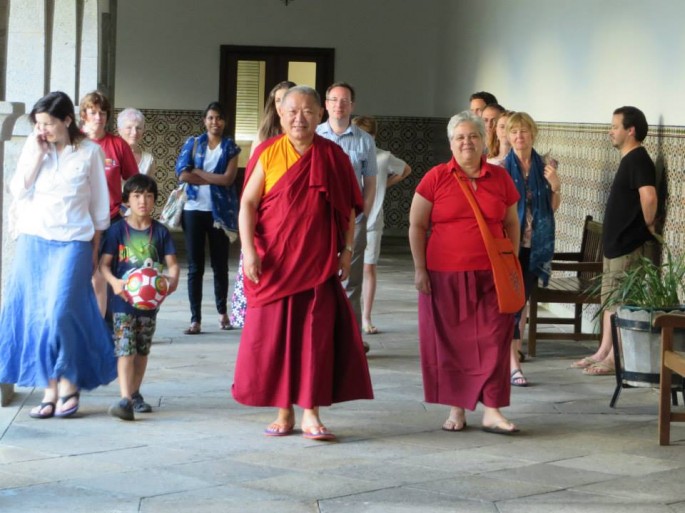 Portugal is a great place to take a summer holiday – especially at Casa da Torre, a Jesuit Centre for Spirituality and Culture, near Braga in the Costa Verde, which is the venue that has hosted the Bodhicharya Summercamp for the last three years. It’s an ancient, cool, cloistered monastery with a tiny, exquisite, four hundred year old chapel, and seemingly endless corridors set in an enormous organic farm estate where the main crops seem to be the grapes that produce a light white wine that was served with dinner, and enormous peaches and nectarines that promised heaven at each mealtime. On the last evening a local choir filled the church with their singing, causing faint echoes of the gods to resonate around the buildings. 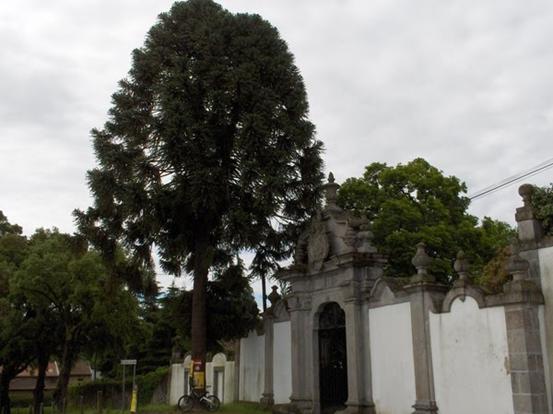 Bodhicharya Summercamp is an event currently organised by Lama Tsering Paldron and her very laid back community at Bodhicharya Portugal; it gives opportunity to spend time relaxing with Ringu Tulku Rinpoche, Lama Shenga, Lama Tsutrim, and many of the international sangha; to listen to teachings, exchange information and projects, share ideas, plan events, debate on dharma, walk, swim (if you enjoy cold river water) or watch birds or the clouds for six days a year. It is also a venue that lends a big welcome to extended families, and this year, mums, dads, children and grandparents created a richness and lightness providing the kind of easy going atmosphere that exactly suits Rinpoche’s own relaxed style. Two years ago my 86 year old mother joined us and divided her time between missals in the chapel, stations of the cross in the garden, and teachings on Mahamudra from Rinpoche. She vows it was her best holiday ever and bemoans the limitations her body now imposes on travel.

This year the teachings were a continuation and completion of the 16th century text Moonbeams of Mahamudra, the Quintessence of Mind and Meditation, a text by Dakpo Tashi Namgyal, this was the fourth year of study on this, it followed the ‘Pointing Out the Dharmakaya’ text of his contemporary, the 9th Karmapa Wangchuk Dorje. The book was chosen as a study programme that would explore in depth the previous topic, giving as it does, comparative explications and extrapolations of the stages of mahamudra. To begin, Rinpoche, as skillful as ever, reminded us that we are only ever able to hear what we can hear, and just reading or studying will never replace personal practise which generates personal experience – we cannot receive a teaching and reach the described state without personal practise, study is only part of the story, and with this instruction, he simplified and made accessible the most profound teachings in the most profound way. For those who were new, and there were some, as well as the ‘old hands’ who have forgotten the basics, Rinpoche gave a talk on the causes of suffering, kleshas and karma, the ignorance of the truth of what we are, that fuels delusion and fear. 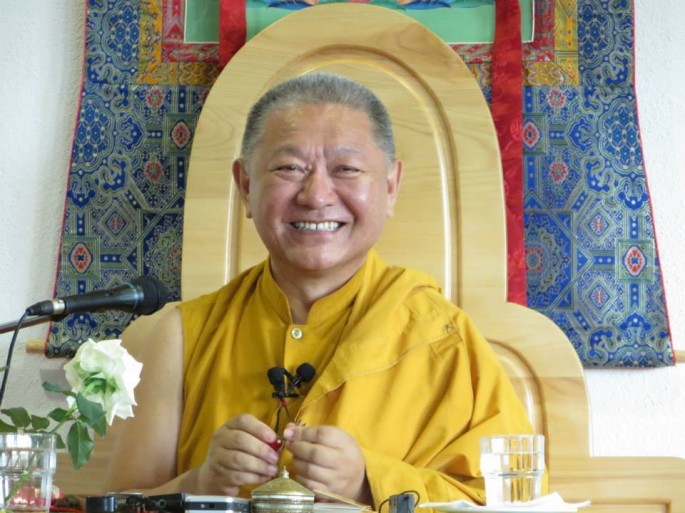 The problem is that we are addicted to the habits of the kleshas, and create karma through this acting out. He said that when he tells the eager aspirant it does not matter what practice s/he does – Tara, Chenrezig, Vajrasattva, whatever, he REALLY means that, because it is the knowing what you have to work on that is important, because otherwise, if you don’t know that wrong habits are the basic problem, then you are pointing arrows eastwards when the target is in the west, regardless of what practice you do. If we are complainers, this habit will be carried into our next life, and if we are happy and joyful, this becomes our karma, so we can make a decision to change that habit. There’s nothing mysterious about it. Develop kindness, you will have kindness karma, offer well being to others, that becomes your karma. It also comes back to you, so there’s no need to worry about being left out. Karma simply means activity, and action always creates a reaction. This we can take charge of. 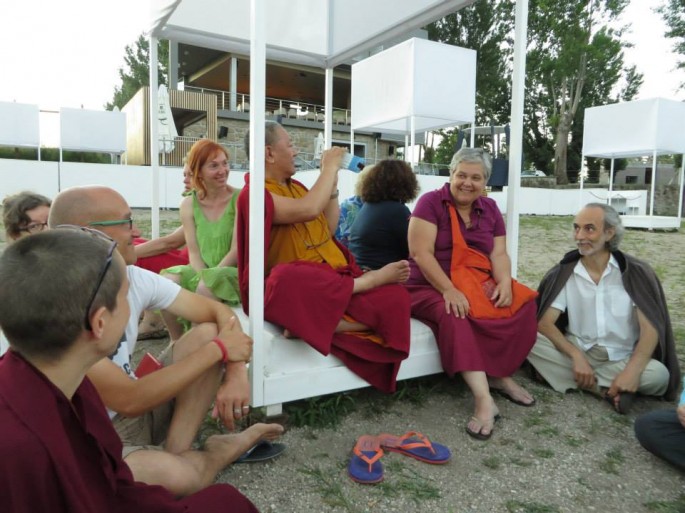 We meditate in order to develop a flexible mind, it works on habits and attitude, and we should seek a practice that we can connect with, otherwise a practice is useless. If you look at it another way, when you can connect to a practice you are connecting to your enlightened qualities, so stick to that one you are connected to. Nothing else is needed.

‘If one meditates for four periods [a day]
And pacifies dualistic thoughts in the non dual path,
One will gain four experiences, described as:
‘The meeting of an old friend
The melting of snow on hot rock,
‘The spreading of forest fire,
And an inner sensation of bliss, clarity, and emptiness.’
—Je Phagmo Drubpa

The text discussed the three trainings; in wisdom, action and meditation, and the three proficiencies: knowing how to begin, to remain, and to conclude. Attitude is everything, and expectation is the pitfall to success, in particular as it hijacks capacity to relax. Concepts keep us in the intellect, which is not where insights arise from. Unborn awareness arises out of meditation, but then our habit is to feed it and make it real. Rinpoche quipped that when he studied Madyamaka Philosophy he got very stressed, because there was never anything to hold on to, and more seriously pointed out that speaking of these things often brings more confusion than clarity. He also dashed any expectation for our own success by saying that the Mahamudra state cannot be prolonged by trying, and that even when glimpsed, we should let go of it, because it can be lost (forever) through grasping unless we have truly realized it:

‘This blissful bliss and this clear clarity
Sometimes emerge, other times disappear!
A meditator who longs for them
And who meditates on absorption
Is like a child gazing at an elusive rainbow,
It becomes dimmer and dimmer
Until it disappears into the sky!’
—Je Drikhungpa

On the other hand, investigation has a place, and we need to examine from all perspectives, not to find something, but to find that there’s nothing to find. Seeing the nature of mind is like seeing the sky, you see there is nothing to see, but you can say you have seen it.

Enlightenment is just a name for being able to do what you must do.

On the other hand when the mind is relaxed, and familiar habitual thoughts arise, this isn’t meditation, so we need to maintain a slight awareness, so that the strong current of thought will not take over. When we can allow emotion without fear and let it go without fear, we are learning meditation, we are learning not to get caught up in what is going on around us, problems can come and go without disturbing our equilibrium. 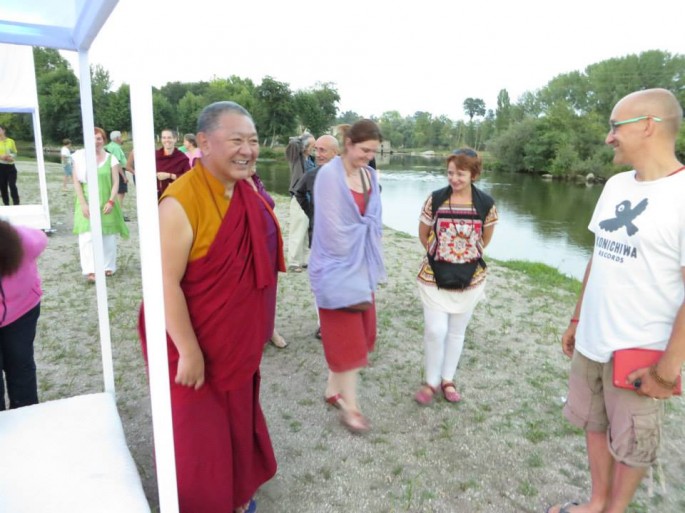 The last three chapters of the book are, (6) on Post meditation practise, [I look out with awareness for dog shit on the path as I walk, and I do not step in it]; (7) Meditative deviation [watch yourself at all times], (8) How to determine the mind as non arising, [bring everything onto the path/peace has to come from within, because war comes from within] and (9) the Resultant realization, [we are not there yet],

p. 409. From the ultimate standpoint:

‘Because it is the intrinsic nature of consciousness, and because, from the standpoint of its essence, it cannot be differentiated’ and ‘ Just as no skillful person can either see or describe the bird’s path across the trackless sky, so no person can either describe or listen to [accounts of] the grounds trodden by the sons of the victorious Buddha’.
—Madhyamakavatara

Without in depth study and practice this text remains elusive, and so Rinpoche taught as only Rinpoche does, simplified and put into the language of four year olds the basic rules of engagement that exemplify the core of the teaching. He made us feel ok if we were unable to understand the language of the wordy translation of Lobsang Lhalungpa, and spoke on it with a stunning clarity and much humour, saying that most of the Buddhist practices are directed towards post [formal] meditation, all of the training instructions focus on how to behave in the day to day. In laypersons terms: Be kind, be generous, watch your tongue, be mindful of the dog shit! 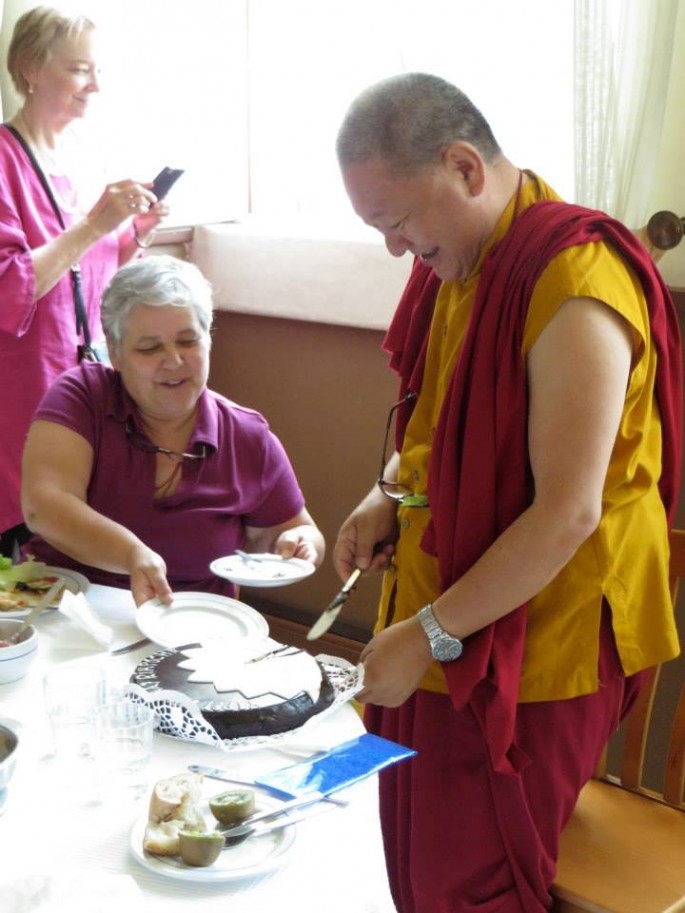 During the week we celebrated Ringu Tulku’s birthday by stringing up all the many cards sending love and good wishes from friends and students across the globe, and by reciting the long life prayer written for Rinpoche by His Eminence Gyaltsap Rinpoche (who himself has just celebrated his own 60th birthday).

Margaret Richardson was unable to come this year, but brought her influence to the gathering with some words over the internet reminding us of her dedication to raising funds for Rigul Trust, and Ringu Tulku’s monastery in Tibet. A spontaneous collection then gathered 1,500 euro in support of the people of Rigul.

Kumanga Andrahennadi gave a presentation of her plans for a very exciting pilgrimage on Sri Lanka with Rinpoche in the new year, to formally launch Bodhicharya there. She invited anyone who wishes to join the party, it is open to all, and details can be got directly from her (email kumiwater@gmail.com).

The closing presentations were introduced by Anna and Peter Kiefer, and – the week being immediately post World Cup – began with a strident dharma league running commentary by Peter, following a match between Samsara and Bodhicharya International, including players from such teams as Gelug, Sakya, Kagyu and Nyingma. It was a brilliant game, hard fought, well played and won 7-0 by Bodhicharya, the new champions. The presentations that followed included a song from Ireland by Maeve (Danny Boy, As Gaeilge), a brilliant poem from the US by Matt and a performance of three rounds of singing, one from each group of Portugese, French, and English speakers, ending with Lama Tsutrim’s dulcet tones leading a beautiful Guru Mantra.

Tsering closed the retreat by reminding us of Rinpoche’s story of ‘Stone Soup’, a concoction of really tasty ingredients that are added to the central ‘stone’ that then is extracted [or extracts itself once it has done its job] leaving behind a rich and nourishing stew known as Bodhicharya Summercamp. The dates set for next year, 2015, are 3rd – 9th August at the same venue.

2 thoughts on “A Short Reflection on Bodhicharya Summercamp 2014”