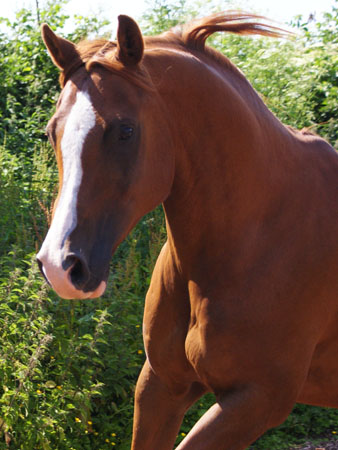 Rowan, one of the group’s equine meditation companions

Please email Caitlin at cait@globalnet.co.uk to find out more

Bodhicharya Somerset is facilitated by Caitlin Collins and its history is linked to the beginnings of Bodhicharya UK back in the spring of 1998. Cait met Rinpoche in London the year before at Rigpa. It was late and Rinpoche had already started teaching, so Cait sat down at the back, feeling rather stressed out, but after a while she found herself relaxing and the possibly irreverent but sincere thought arose in her mind: ‘Oh, I like this chap; I think we are in safe hands here.’ On a visit to Samye Ling later that summer Cait and Rinpoche discussed the idea of starting a Dharma group under his direction. In May 1998 Rinpoche came to visit the new Bodhicharya Buddhist Group, then meeting at The Hayloft in Emsworth on the Sussex, Hampshire border; the room was upstairs and so many people turned up people were seriously worried that the creaky wooden floor might give way.

In July 1999 the Sussex group hosted what would turn out to be the first Bodhicharya Summer Camp and over the next eight years many guest teachers too, including Ringu Tulku Rinpoche who visited each year.

In 2006 Caitlin left to go to Somerset and Ian Stuart took over facilitating the Sussex group, which had then moved to the home it continues to occupy: The Hamblin Hall at Bosham House in Bosham, on the West Sussex, Hampshire border. When Ian moved away Pema Chalmers began facilitating the group’s activities.

One of the first things Caitlin did on moving to Somerset was to start another Bodhicharya group. The Somerset group meets the first and third Tuesdays at Townsend House in Minehead. Evenings include teaching, discussion, and meditation practice. They are fortunate to be in the beautiful Exmoor National Park, with the opportunity to practise and meditate outside in the wonderful countryside and with the animals. Horses are especially good meditation companions and teachers, and they sometimes meet in the field with Cait’s horses; while the privilege of sitting with the wild ponies who live on the moor is a blessing to cherish.

To find out more about the group and how to get involved, either in-person or online, please email Caitlin at cait@globalnet.co.uk